It is the ratio of the speeds of light in a pair of media.

It is used to measure the change in direction of a light ray occurring in two media.

Light travels fastest in vacuum (3×108 ms–1). In air, there is only marginal decrease. It reduces considerably in glass or water.

Refractive index of medium 1 with respect to medium 2 is represented as n12. 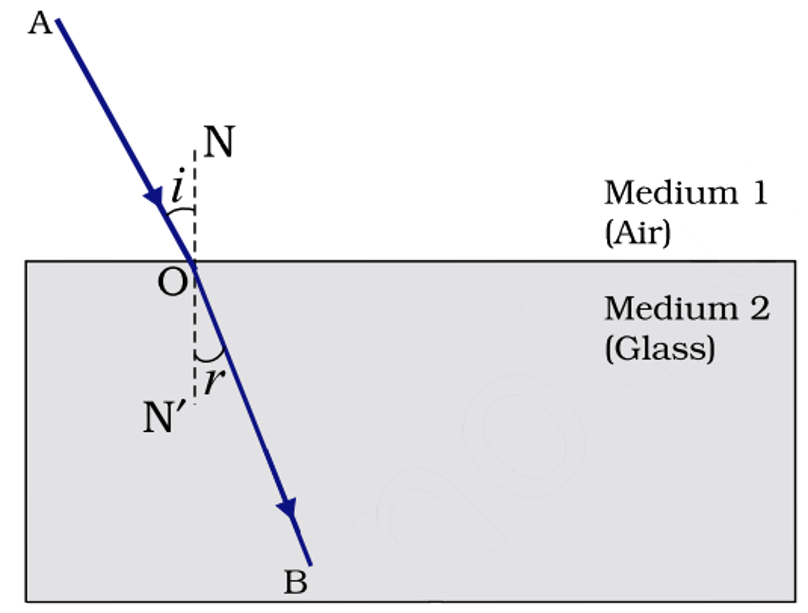 The ratio of the speed of light in vacuum or air (medium 1) and in the medium 2 is called absolute refractive index. It is represented as n2.

The glasses used in spectacles and magnifying glass used by watchmakers are examples of lenses.

A transparent material bound by two surfaces, of which one or both surfaces are spherical, forms a lens.

In a lens with only one spherical surface, the other surface would be plane.

A lens with two spherical surfaces, bulging outwards is called a double convex lens (simply a convex lens). It is thicker at the middle than at the edges. Such lenses converge light rays. So, it is also called converging lens.

A double concave lens (simply a concave lens) is bounded by two spherical surfaces, curved inwards. It is thicker at edges than at the middle. Such lenses diverge light rays. So they are also called diverging lenses. 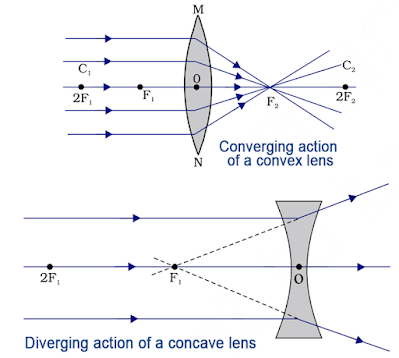 A convex lens or concave lens has two spherical surfaces. Each of them forms a part of a sphere. The centres of these spheres are called centres of curvature of the lens (C1 & C2).

An imaginary straight line passing through the two centres of curvature of a lens is called its principal axis.

The central point of a lens is its optical centre (O).

A ray of light through the optical centre of a lens passes without any deviation. The effective diameter of the circular outline of a spherical lens is called its aperture.

Thin lenses with small apertures: The lenses whose aperture is much less than its radius of curvature and the two centres of curvatures are equidistant from the optical centre.

Incidence of parallel rays on a lens:

Using a convex lens, focus the light from the Sun on a paper. Obtain a sharp bright real image of the Sun.

Hold the paper and lens in the same position for a while.

The paper begins to burn and catches fire.

The parallel rays of light from the Sun are converged by the lens at the sharp bright spot on the paper. It generates heat and causes burning of paper.

If parallel rays are passed from the opposite surface of the lens, another principal focus is formed on opposite side. A lens has two principal foci (F1 & F2).