Find out approximate focal length of a concave mirror.

Mark 3 parallel lines P, F & C on a table such that the distance between any two successive lines is equal to the focal length of the mirror.

Keep a bright object (e.g. burning candle) at a position far beyond C. Place a paper screen and move it in front of the mirror to obtain a sharp bright image of the candle flame.

Nature, position and size of the image formed by a concave mirror depends on the position of the object in relation to points P, F & C.

In an extended object, each small portion acts like a point source. An infinite number of rays originate from each point. But it is easier to consider only two rays, for the clarity of the ray diagram and to know their directions after reflection.

The intersection of at least two reflected rays gives the position of image of the point object. Any two of the following rays can be considered to locate the image.

d) A ray incident obliquely to the principal axis, towards pole (P), on the concave mirror or a convex mirror. It is reflected obliquely.

(a) Image formation by a Concave Mirror 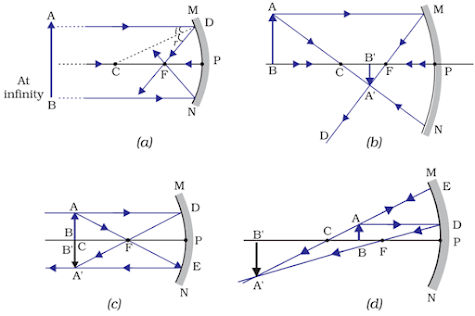 When the object is between F & P, image is not obtained on the screen. Here, virtual image can be seen in mirror.

·   Used in torches, search-lights and vehicles headlights to get powerful parallel beams of light.

·   Used as shaving mirrors to see a larger image of the face.

·   Used by dentists to see large images of teeth of patients.

(b) Image formation by a Convex Mirror

Show a pencil in the upright position in front of a convex mirror. Its image in the mirror is erect and diminished.

As the pencil is moved away from the mirror, the image becomes smaller and moves closer to the focus.

Two positions of the object to study the image formed by a convex mirror are shown below.

(a) Formation of image when the object is at infinity

In plane mirrors and concave mirrors of any sizes, we cannot see a full-length image of a distant object. But it is possible in a convex mirror with wider field of view.

A convex mirror is fitted in a wall of Agra Fort facing Taj Mahal to observe the full image of Taj Mahal.

Convex mirrors give an erect, diminished, virtual image. Also, they have a wider field of view as they are curved outwards. So, they are used as rear-view (wing) mirrors in vehicles. It enables the driver to see traffic behind him.