Refraction through a Rectangular Glass Slab

Fix a white paper on a drawing board and place a rectangular glass slab on its middle.

Draw the outline (ABCD) of the slab.

Fix two pins (E & F) vertically such that the line joining the pins is inclined to the edge AB.

Look the images of the pins E & F through the opposite edge. Fix two other pins (G & H) such that these pins and the images of E & F lie on a straight line.

Remove the pins and the slab.

Join O and O′. Also produce EF up to P, as shown below: 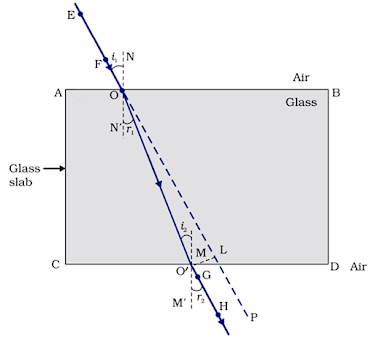 Refraction of light through a rectangular glass slab

Compare the angle of incidence with angle of refraction at both refracting surfaces AB & CD. A ray EO is obliquely incident on surface AB, called incident ray.

OO′ is the refracted ray and O′H is the emergent ray. The emergent ray is parallel to the direction of the incident ray. The extent of bending of the ray of light at the opposite parallel faces AB (air-glass interface) and CD (glass-air interface) of the rectangular glass slab is equal and opposite. This is why the ray emerges parallel to the incident ray. However, the light ray is shifted sideward slightly.

When a light ray is incident normally to the interface of two media, it goes along the same straight line.

Refraction is due to change in the speed of light as it enters from one transparent medium to another.

Laws of refraction of light:

This constant value is called the refractive index of the second medium with respect to the first.