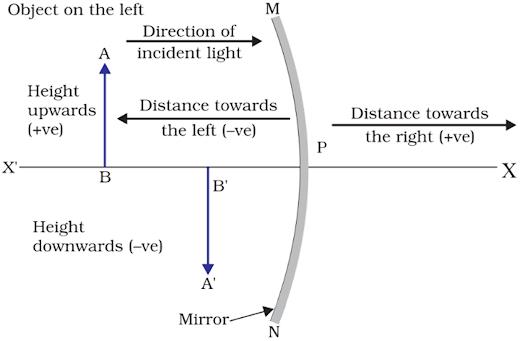 The conventions are as follows:

a) The object is always placed to the left of the mirror. i.e., light from the object falls on the mirror from the left-hand side.

b) All distances parallel to the principal axis are measured from the pole of the mirror.

d) Distances measured perpendicular to and above the principal axis (along + y-axis) are taken as positive.

e) Distances measured perpendicular to and below the principal axis (along – y-axis) are taken as negative.

In a spherical mirror, the distance of the object from its pole is called the object distance (u).

The distance of the principal focus from the pole is called the focal length (f).

This formula is valid in all situations for all spherical mirrors for all positions of the object.

It is the enlargement of the image formed by a spherical mirror, relative to the size of the object.

Magnification is also related to the object distance (u) and image distance (v). It can be expressed as:

The height of the image is taken as positive for virtual images and negative for real images.

Problem: A convex mirror used for rear-view on an automobile has a radius of curvature of 3.00 m. If a bus is located at 5.00 m from this mirror, find the position, nature and size of the image.

Problem: An object, 4.0 cm in size, is placed at 25.0 cm in front of a concave mirror of focal length 15.0 cm. At what distance from the mirror should a screen be placed in order to obtain a sharp image? Find the nature and the size of the image. 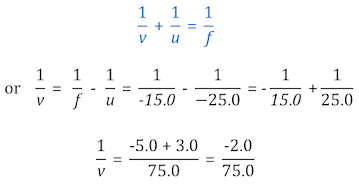 The screen should be placed at 37.5 cm in front of the mirror. The image is real.

The image is inverted and enlarged.