The principle of electromagnetic induction can be applied to produce large currents for use in homes and industry.

In an electric generator, mechanical energy is used to rotate a conductor in a magnetic field to yield electricity. 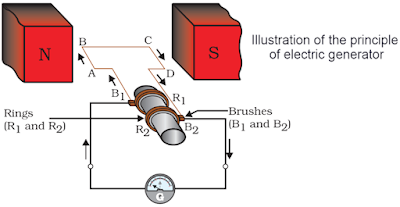 An electric generator consists of a rotating rectangular coil ABCD placed between the two poles of a permanent magnet. The two ends of this coil are connected to the two rings R1 & R2. Their inner sides are insulated.

The two conducting stationary brushes B1 & B2 are kept pressed separately on the rings R1 & R2, respectively.

R1 & R2 are internally attached to an axle. The axle may be mechanically rotated from outside to rotate the coil inside the magnetic field.

Outer ends of the brushes are connected to galvanometer.

When the axle attached to the two rings is rotated such that the arm AB moves up (and the arm CD moves down) in the magnetic field produced by the permanent magnet.

The coil ABCD is rotated clockwise. By applying Fleming’s right-hand rule, the induced currents are set up in these arms along the directions AB and CD. Thus an induced current flows in the direction ABCD. If there are larger numbers of turns in the coil, the current generated in each turn adds up to give a large current through the coil. Thus the current in the external circuit flows from B2 to B1.

After half a rotation, arm CD starts moving up and AB moving down. As a result, the directions of the induced currents in both the arms change, giving rise to the net induced current in the direction DCBA. The current in the external circuit now flows from B1 to B2. Thus after every half rotation the polarity of the current in the respective arms changes. Such a current, which changes (reverses) direction after equal intervals of time, is called an alternating current (AC). This device is called an AC generator.

Most power stations constructed these days produce AC. In India, the AC changes direction after every 1/100 second, that is, the frequency of AC is 50 Hz.

Advantage of AC over DC: Electric power can be transmitted over long distances without much loss of energy.