Electricity and Magnetism are linked to each other. It can be shown by the following experiment.

Place a straight thick copper wire b/w the points X & Y in an electric circuit. The wire is kept perpendicular to the plane of paper.

Horizontally place a small compass near to copper wire.

On passing the current, the compass needle is deflected. It means that the electric current through the copper wire produces a magnetic effect.

A compass needle is a small bar magnet. Its ends point towards north and south directions. It gets deflected when brought near a bar magnet.

o  Fix a white paper on a drawing board and place a bar magnet in its centre.

o  Tap the board gently. Iron filings near the magnet align along the field lines. 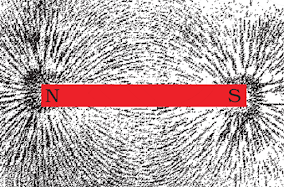 Reason: The magnet exerts its influence in the surrounding region. So, the iron filings experience a force. It makes iron filings to arrange in a pattern.

o  Place a bar magnet on white paper fixed on a drawing board. Mark the boundary of the magnet.

o  Now move the needle to a new position such that its south pole occupies the position previously occupied by its north pole. In this way, proceed step by step till reach the south pole of the magnet.

o  Join the points marked on the paper by a smooth curve. This curve represents a field line. 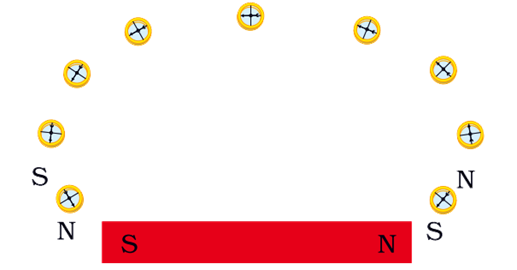 o  Repeat the above procedure and draw many lines. These lines are called magnetic field lines.

o  The deflection in the compass needle increases as the needle is moved towards the poles. 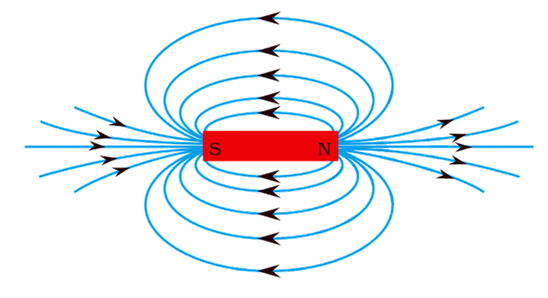 Field lines around a bar magnet

Relative strength of the magnetic field is shown by the degree of closeness of the field lines. The field is stronger (i.e., greater force acting on the pole of another magnet) where the field lines are crowded.

Two field-lines do not cross each other because the compass needle cannot point towards two directions at the point of intersection.