Consider a conductor is moving inside a magnetic field or a magnetic field is changing around a fixed conductor. This was first studied by English experimental physicist Michael Faraday (1831). He discovered how a moving magnet can be used to generate electric currents. This effect can be observed by the following activity.

Galvanometer is an instrument to detect the presence of current in a circuit. The pointer remains at zero for zero current. It deflects to the left or right depending on the direction of current. 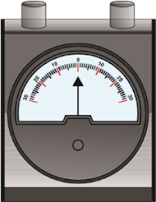 Faraday had no formal education. He developed his interest in science by reading books in book-binding shop he worked. He made notes of Humphrey Davy’s lectures and sent them to Davy. Soon he became an assistant in Davy’s laboratory at the Royal Institute. Faraday discovered electromagnetic induction and the laws of electrolysis. He turned down honorary degrees conferred by several universities.

The induced current is highest when the direction of motion of the coil is at right angles to the magnetic field.

The direction of the induced current can be found by Fleming’s right-hand rule. Stretch the thumb, forefinger and middle finger of right hand perpendicular to each other.