FORCE ON A CURRENT-CARRYING CONDUCTOR IN A MAGNETIC FIELD

An electric current through a conductor produces a magnetic field. This field exerts a force on a magnet placed near the conductor.

French scientist Andre Marie Ampere (1775–1836) suggested that the magnet also exerts an equal and opposite force on the current-carrying conductor. This can be demonstrated through an activity. 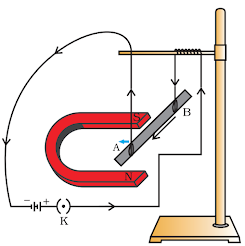 A current-carrying rod, AB, experiences a force perpendicular to its length and the magnetic field.

The displacement of the rod (AB) suggests that

·   A force is exerted on the current-carrying aluminium rod when it is placed in a magnetic field.

·   Direction of force is also reversed when the direction of current through the conductor is reversed. 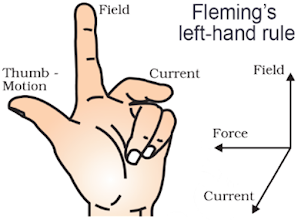 Problem: An electron enters a magnetic field at right angles to it, as shown below. The direction of force acting on the electron will be 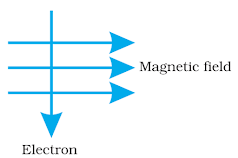