It is a rotating device that converts electrical energy to mechanical energy.

An electric motor consists of a rectangular coil ABCD of insulated copper wire. It is placed between the two poles of a magnetic field such that the arm AB and CD are perpendicular to the direction of the magnetic field.

The ends of the coil are connected to the two halves P & Q of a split ring. Inner sides of halves are insulated and attached to an axle. The external conducting edges of P & Q touch two conducting stationary brushes X & Y. 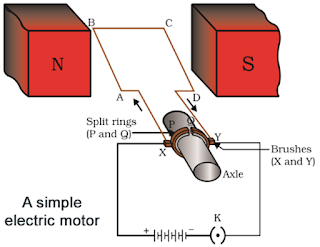 Current from the source battery enters the coil ABCD through conducting brush X and flows back to the battery through brush Y. The current in arm AB (from A to B) and arm CD (from C to D) is in opposite direction.

A device that reverses the direction of flow of current through a circuit is called a commutator. In electric motors, the split ring acts as a commutator.

The commercial motors use