A battery or a cell is a source of electrical energy. It generates potential difference that sets the electrons in motion to flow the current through a resistor or a system of resistors.

A part of the source energy to maintain the current may be consumed into useful work (e.g. rotation of an electric fan). Rest of the energy is lost as heat. E.g., an electric fan becomes warm if used for longer time.

If an electric circuit is purely resistive (i.e. a configuration of resistors only connected to a battery), the source energy is dissipated entirely as heat. This is called heating effect of electric current.

Consider a current I flowing through a resistor of resistance R. Let the potential difference across it be V and t is the time during which a charge Q flows across. 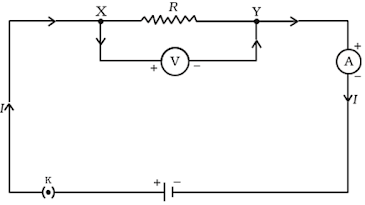 A steady current in a purely resistive electric circuit.

The work done in moving the charge Q through a potential difference V is VQ. Therefore, the source must supply energy equal to VQ in time t. Hence the power input to the circuit by the source is

Or the energy supplied to the circuit by the source in time t is P × t, i.e., VIt. This energy is dissipated in the resistor as heat (H).

This is known as Joule’s law of heating. It implies that heat produced in a resistor is directly proportional to

In practical situations, when an electric appliance is connected to a voltage source, Eq. H = I2 Rt is used after calculating the current using the relation I = V/R.

Thus the current I = P/V

(a)   When heating is at the maximum rate:

Resistance of the electric iron is

(b)  When heating is at the minimum rate:

Resistance of the electric iron is

Problem: 100 J of heat is produced each second in a 4 Ω resistance. Find the potential difference across resistor.

So, the current through the resistor is

Thus the potential difference across the resistor is

Due to heating effect of electric current, electrical energy is lost as heat. Also, it may alter the properties of components in electric circuits. But heating effect (Joule’s heating) has many useful applications.

b. To produce light in electric bulb. Here, the filament made of metals with high melting point can retain much heat. So it gets very hot and emits light.

E.g. tungsten (melting point 3380°C) is used to make filaments. Filament should be thermally isolated, using insulating support. The bulbs are filled with chemically inactive nitrogen and argon gases to prolong the life of filament. Most of the power consumed by the filament appears as heat, but a small part is radiated as light.

It protects circuits and appliances by stopping the overflow of electric current. The fuse is placed in series with the device. It consists of a piece of wire made of a metal or an alloy of suitable melting point (aluminium, copper, iron, lead etc.). During the overflow of the current, the temperature of the fuse wire increases. It melts the fuse wire and breaks the circuit.

The fuse wire is encased in a cartridge of porcelain or similar material with metal ends.

Power is the rate of doing work or rate of consumption of energy.

Equation H = I2 Rt gives the rate at which electric energy is dissipated or consumed in an electric circuit. This is also termed as electric power. The power P is given by

The SI unit of electric power is watt (W). It is the power consumed by a device that carries 1 A of current when operated at a potential difference of 1 V.

Watt is a very small unit. So, practically a much larger unit called kilowatt (1000 watts) is used.

Electrical energy is the product of power and time. Its unit is watt hour (W h). One watt hour is the energy consumed when 1 watt of power is used for 1 hour.

In an electric circuit, electrons are not consumed. We pay for energy to move electrons through electric gadgets.

Problem: An electric bulb is connected to a 220 V generator. The current is 0.50 A. What is the power of the bulb?

Problem: An electric refrigerator rated 400 W operates 8 hour/day. What is the cost of the energy to operate it for 30 days at Rs 3.00 per kW h?

Total energy consumed by the refrigerator in 30 days:

∴ cost of energy to operate the refrigerator for 30 days: