Flow of electric charges through a conductor (e.g., metallic wire) is called an electric current.

In a torch, the cells (or a battery, when placed in proper order) provide electric current through the bulb to glow.

A continuous and closed path of an electric current is called electric circuit. If the circuit is broken (or the switch is turned off), the current stops.

Electric current is measured as the amount of charge flowing through a particular area in unit time. i.e., it is the rate of flow of electric charges.

Ammeter: An instrument to measure electric current in a circuit. It is always connected in series in a circuit. 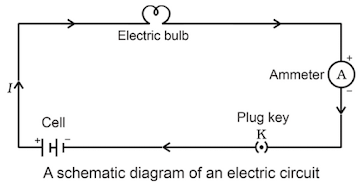 In a circuit, electric current flows from positive terminal of the cell to negative terminal through bulb & ammeter.

Problem: A current of 0.5 A is drawn by a filament of an electric bulb for 10 minutes. Find the amount of electric charge that flows through the circuit.

‘Flow’ of charges inside a wire

Inside a solid conductor, atoms are packed together. But electrons can easily travel through it, almost as if they are in a vacuum. When a current flows through a conductor, the electrons move with a certain average ‘drift speed’ (1 mm s-1 for a typical copper wire). However, an electric bulb lights up as soon as the switch is turn on. It is not due to the movement of an electron from one terminal to the other terminal through the bulb.