Electric charges do not flow in a metallic conductor (e.g. copper wire) by themselves. Here, gravity has no role.

Electrons move only if there is a difference of electric pressure in conductor. It is called potential difference.

When the cell is connected to a conducting circuit, the potential difference sets the charges in motion and produces an electric current. To maintain this current, the cell has to expend chemical energy stored in it.

The potential difference between two points in an electric circuit is the work done to move a unit charge from one point to the other.

One volt is the potential difference between two points in a current carrying conductor when 1 joule of work is done to move 1 coulomb charge from one point to other.

Problem: How much work is done in moving a charge of 2 C across two points having a potential difference 12 V?

Conventional symbols of some commonly used components in circuit diagrams 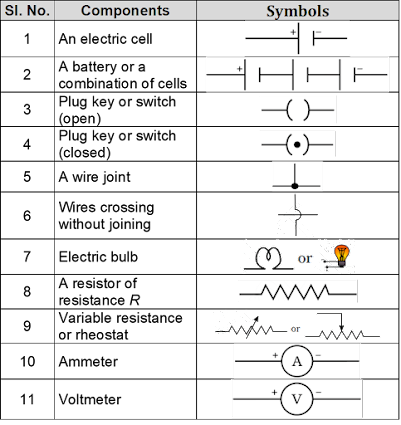