RESISTANCE OF A SYSTEM OF RESISTORS

In electrical gadgets, resistors are used in various combinations based on Ohm’s law. 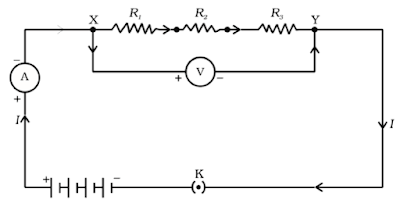 Change the position of ammeter to anywhere in between the resistors.

Now insert the voltmeter across the ends X and P of the first resistor, as shown below. 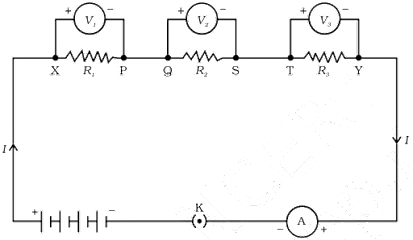 Measure the potential differences V1, V2 and V3 across the first, second and third resistors separately.

Let I be the current through this electric circuit. The current through each resistor is also I. The three resistors joined in series can be replaced by an equivalent single resistor of resistance R, such that the potential difference and the current remains the same. Applying the Ohm’s law to the entire circuit, we have

On applying Ohm’s law to the three resistors separately,

When several resistors are joined in series, resistance of the combination Rs equals the sum of their individual resistances, R1, R2, R3. 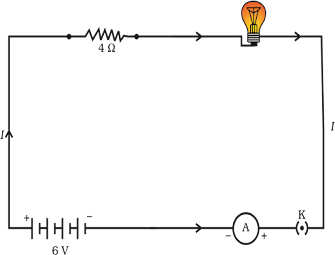 Resistance of the conductor connected in series, R2 = 4 Ω.

b) The total potential difference across the two terminals of the battery V = 6 V.

The current through the circuit is I = V/Rs

Potential difference across the conductor:

If we replace the series combination of electric lamp and conductor by a single and equivalent resistor, its resistance R would be

This is the total resistance of the series circuit; it is equal to the sum of the two resistances.

Make a parallel combination, XY, of three resistors having resistances R1, R2, & R3 in an electric circuit. Connect a voltmeter in parallel with the resistors. Insert the ammeter in series with the resistor R1, as shown below. Note the ammeter reading, I1. Similarly, measure the currents I2 & I3 through R2 & R3 respectively.

It is observed that the total current I, is equal to the sum of the separate currents through each branch.

Let Rp be the equivalent resistance of the parallel combination of resistors.

On applying Ohm’s law to each resistor, we have

Problem: In the circuit diagram given, suppose the resistors R1, R2 & R3 have the values 5 Ω, 10 Ω, 30 Ω, respectively, which have been connected to a battery of 12 V. Calculate (a) the current through each resistor, (b) total current in the circuit, and (c) total circuit resistance.

This is also the potential difference across each of the individual resistor. 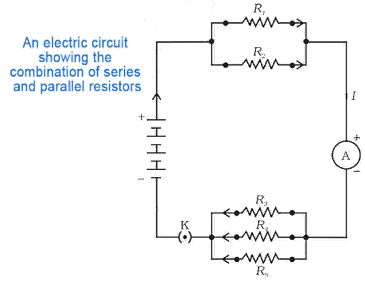