Using one cell, note the ammeter reading I for the current and voltmeter reading V for potential difference across the nichrome wire. Repeat this using 2, 3 & 4 cells.

In each case, V/I value is approximately the same.

V–I graph is a straight line. Thus, V/I is a constant ratio. 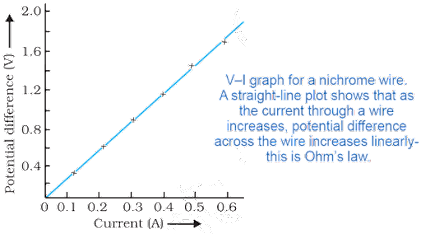 In 1827, Georg Simon Ohm (Germany, 1787–1854) found out relationship between current and the potential difference. Potential difference (V) across the ends of a metallic wire in an electric circuit is directly proportional to the current I flowing through it at constant temperature. It is called Ohm’s law.

R is a constant for the given metallic wire at a given temperature and is called its resistance. It is the property of a conductor to resist the flow of charges. Its SI unit is ohm (Ω).

If the potential difference is 1 V and the current is 1 A, then the resistance (R) of the conductor is 1 Ω.

A conductor having appreciable resistance is called a resistor. It is used to control electric current.

The current through a resistor is inversely proportional to its resistance. If the resistance is doubled the current gets halved. It has many practical applications.

Electrical resistance of a conductor:

Set up a circuit by connecting four dry cells of 1.5 V each in series with the ammeter leaving a gap XY in the circuit.

Complete the circuit by connecting the nichrome wire in the gap XY. Plug the key. Note down ammeter reading.

Replace the nichrome wire with the torch bulb in the circuit and note down the ammeter reading.

Repeat this with 10 W bulb and any material component.

The current is different for different components. In certain components, there is easy flow of electric current while the others resist the flow.

Within a conductor, electrons are not completely free to move due to the attraction by atoms. So, resistance is increased and motion of electrons is retarded.

A component that conducts electricity and has a low resistance is called a good conductor.

A component with a high resistance is a poor conductor.

A component with very high resistance is called an insulator. It does not conduct electricity.