Formula for spherical lenses gives the relationship between object distance (u), image-distance (v) and the focal length (f). The lens formula is expressed as

The lens formula is general and is valid in all situations for any spherical lens.

Magnification is also related to the object-distance u, and the image-distance v.

Problem: A concave lens has focal length of 15 cm. At what distance should the object from the lens be placed so that it forms an image at 10 cm from the lens? Also, find the magnification produced by the lens.

Solution: A concave lens always forms a virtual, erect image on the same side of the object. 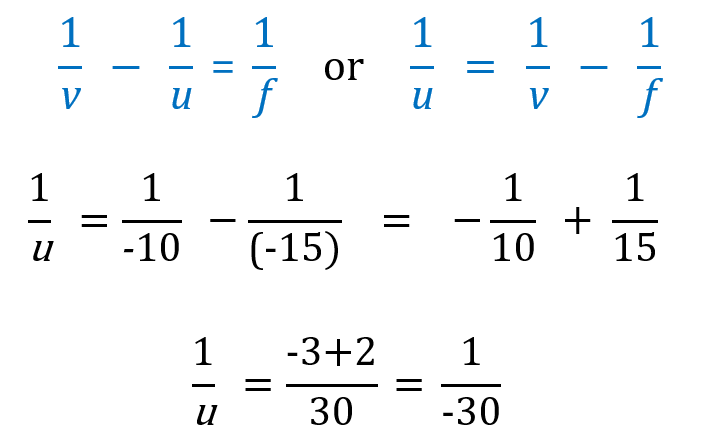 Thus, the object-distance is 30 cm.

The positive sign shows that the image is erect and virtual. The image is one-third of the size of the object.

Problem: A 2.0 cm tall object is placed perpendicular to the principal axis of a convex lens of focal length 10 cm. The distance of the object from the lens is 15 cm. Find the nature, position and size of the image. Also find its magnification.

Height of the image h′=?

The positive sign of v shows that the image is formed at a distance of 30 cm on the other side of the optical centre. The image is real and inverted.

The negative signs of m and h′ show that the image is inverted and real. It is formed below the principal axis. Thus, a real, inverted image, 4 cm tall, is formed at a distance of 30 cm on the other side of the lens. The image is two times enlarged.

Power of a Lens

The ability of a lens to converge or diverge light rays depends on its focal length.

A convex lens of short focal length bends the light rays through large angles and focus closer to the optical centre.

A concave lens of very short focal length causes higher divergence than the one with longer focal length.

The degree of convergence or divergence of light rays by a lens is expressed as its power.

The power of a lens (P) is defined as the reciprocal of its focal length (f).

The SI unit of power of a lens is dioptre (D).

The power of a convex lens is positive and that of a concave lens is negative.

Opticians prescribe corrective lenses indicating their powers. It is more convenient to use powers instead of focal lengths. E.g.

In many optical instruments, several lenses are combined to increase magnification and sharpness of the image. The net power (P) of the lenses placed in contact is the algebraic sum of the individual powers P1, P2, P3, … (P = P1 + P2 + P3 + …).

During eye-testing, an optician puts several corrective lenses of known power inside the testing spectacles’ frame. Thus the required power of the lens is calculated by algebraic addition. E.g., two lenses of power + 2.0 D & + 0.25 D is equivalent to a single lens of power + 2.25 D.

The simple additive property of the powers of lenses can be used to design lens systems to minimise certain defects in images produced by a single lens. Such a lens system is commonly used in the design of lenses of camera, microscopes and telescopes.