·   It is proposed by Francis Crick. It states that the genetic information flows from DNA → RNA → Protein.

·   In some viruses, flow of information is in reverse direction (from RNA to DNA). It is called reverse transcription.

·   Replication is the copying of DNA from parental DNA.

·   Watson & Crick proposed Semi-conservative model of replication. It suggests that the parental DNA strands act as template for the synthesis of new complementary strands. After replication, each DNA molecule would have one parental and one new strand.

} They grew E. coli in 15NH4Cl medium (15N = heavy isotope of nitrogen) as the only nitrogen source. As a result, 15N was incorporated into newly synthesised DNA (heavy DNA or 15N DNA).

} Heavy DNA can be distinguished from normal DNA (light DNA or 14N DNA) by centrifugation in a cesium chloride (CsCl) density gradient.

} E. coli cells from 15N medium were transferred to 14NH4Cl medium. After one generation (i.e. after 20 minutes), they isolated and centrifuged the DNA. Its density was intermediate (hybrid) between 15N DNA and 14N DNA. This shows that in newly formed DNA, one strand is old (15N type) and one strand is new (14N type). This confirms semi-conservative replication.

} After II generation (i.e. after 40 minutes), there was equal amounts of hybrid DNA and light DNA.

The Machinery and Enzymes for Replication

·   A unit of replication with one origin is called a replicon.

·   During replication, the 2 strands unwind and separate by breaking H-bonds in presence of an enzyme, Helicase.

·   Unwinding of the DNA molecule at a point forms a ‘Y’-shaped structure called replication fork. 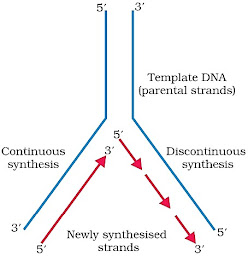 ·   The separated strands act as templates for the synthesis of new strands.

·   Firstly, a small RNA primer is synthesized in presence of an enzyme, primase.

·   In presence of an enzyme, DNA dependent DNA polymerase, many nucleotides join with one another to primer strand and form a polynucleotide chain (new strand).

·   During replication, one strand is formed as a continuous stretch in 5’→ 3’ direction (Continuous synthesis). This strand is called leading strand.

·    The other strand is formed in small stretches (Okazaki fragments) in 5’→ 3’ direction (Discontinuous synthesis).

·   The Okazaki fragments are then joined together to form a new strand by an enzyme, DNA ligase. This new strand is called lagging strand.

·   If a wrong base is introduced in the new strand, DNA polymerase can do proof reading.

·   In eukaryotes, the replication of DNA takes place at S-phase of the cell cycle. Failure in cell division after DNA replication results in polyploidy.