§ It is the sequence of nucleotides (nitrogen bases) in mRNA that contains information for protein synthesis (translation).

§ The sequence of 3 bases determining a single amino acid is called codon.

used to polymerize RNA with defined sequences in a template independent manner.

The codons for various amino acids 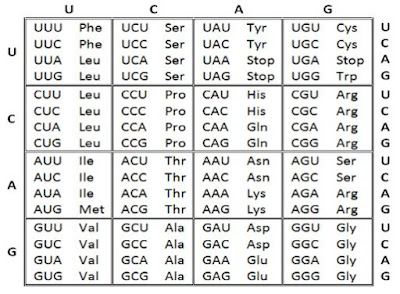 ·    61 codons code for amino acids. 3 codons (UAA, UAG & UGA) do not code for any amino acids. They act as stop codons (Termination codons or non-sense codons).

·   Genetic code is universal. E.g. From bacteria to human UUU codes for Phenylalanine. Some exceptions are found in mitochondrial codons, and in some protozoans.

·   No punctuations b/w adjacent codons (comma less code). The codon is read in mRNA in a contiguous fashion.

·   An amino acid is coded by more than one codon (except AUG for methionine & UGG for tryptophan). Such codons are called degenerate codons.

·   Genetic code is unambiguous and specific. i.e. one codon specifies only one amino acid.

·    AUG has dual functions. It codes for Methionine and acts as initiator codon. In eukaryotes, methionine is the first amino acid and formyl methionine in prokaryotes.

-    Relationship between genes & DNA are best understood by mutation studies. Deletions & rearrangements in a DNA may cause loss or gain of a gene and so a function.

-    Insertion/ deletion of three or its multiple bases insert or delete one or multiple codon. The reading frame remains unaltered from that point onwards. Hence one or multiple amino acids are inserted /deleted.

-    It proves that codon is a triplet and is read contiguously.

Francis Crick postulated presence of an adapter molecule that can read the code and to link with amino acids.

tRNA is called adapter molecule because it has

·   An Anticodon (NODOC) loop that has bases complementary to the codon.

-    For initiation, there is another tRNA called initiator tRNA.

-    There are no tRNAs for stop codons.