-  It is the process of polymerisation of amino acids to form a polypeptide based on the sequence of codons in mRNA.

-    It takes place in ribosomes. Ribosome consists of structural RNAs and about 80 types of proteins.

-    Ribosome also acts as a catalyst (23S rRNA in bacteria is the enzyme- ribozyme) for the formation of peptide bond (peptidyl transferase enzyme in large subunit of ribosome).

·   For this, amino acids are activated (amino acid + ATP) and linked to their cognate tRNA in presence of aminoacyl tRNA synthetase. Thus, the tRNA becomes charged.

·   In this, small subunit of ribosome binds to mRNA at the start codon (AUG). 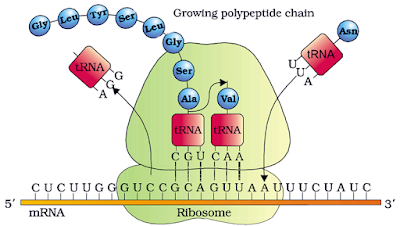 ·   Second aminoacyl tRNA binds to the A site of ribosome. Its anticodon binds to the second codon on the mRNA and a peptide bond is formed between first and second amino acids in presence of peptidyl transferase.

·    First amino acid and its tRNA are broken. This tRNA is removed from P site and second tRNA from A site is pulled to P site along with mRNA. This is called translocation.

·   These processes are repeated for other codons in mRNA.

·   During translation, ribosome moves from codon to codon.

·   When a release factor binds to stop codon, the translation terminates.

·    The polypeptide and tRNA are released from the ribosomes.

·   The ribosome dissociates into large and small subunits.

A group of ribosomes associated with a single mRNA for translation is called a polyribosome (polysomes).

An mRNA has additional sequences that are not translated (untranslated regions or UTR). UTRs are present at both 5’-end (before start codon) and 3’-end (after stop codon). They are required for efficient translation process.