·     DNA is the genetic material in most of the organisms.

·     RNA is the genetic material in some viruses. RNA mostly functions as messengers.

} Purines: It includes Adenine (A) and Guanine (G).

} Pyrimidines: It includes Cytosine (C), Thymine (T) & Uracil (U). Thymine (5-methyl Uracil) present only in DNA and Uracil only in RNA.

A nitrogenous base is linked to the OH of 1' C pentose sugar through an N-glycosidic linkage to form nucleoside.

A phosphate group is linked to OH of 5' C of a nucleoside through phosphoester linkage to form nucleotide (or deoxynucleotide).

2 nucleotides are linked through 3’-5’ phosphodiester bond to form dinucleotide.

When more nucleotides are linked, it forms polynucleotide.

STRUCTURE OF THE DNA

} Friedrich Meischer (1869): Identified DNA and named it as ‘Nuclein’. 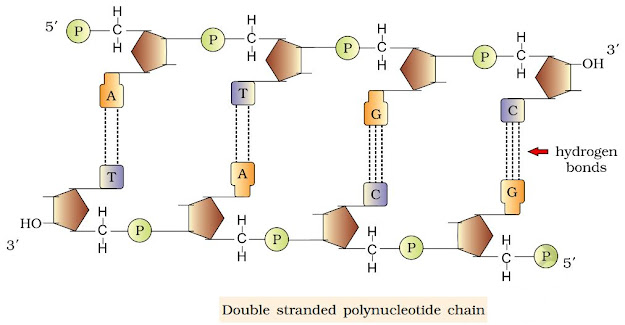 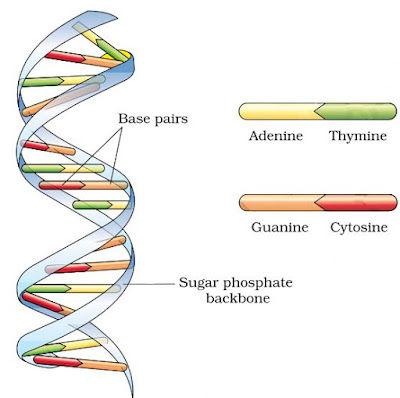 } DNA is made of 2 polynucleotide chains coiled in a right-handed fashion. Its backbone is formed of sugar & phosphates. The bases project inside.

} The bases in 2 strands are paired through H-bonds forming base pairs (bp).

} Purine comes opposite to a pyrimidine. This generates uniform distance between the 2 strands.

Length of DNA = number of base pairs X distance between two adjacent base pairs.

Therefore the number of base pairs

§ In prokaryotes (E.g. E. coli), the DNA is not scattered throughout the cell. DNA is negatively charged. So it is held with some positively charged proteins to form nucleoid.

§ In eukaryotes, there is a set of positively charged, basic proteins called histones.

§ Negatively charged DNA is wrapped around histone octamer to give nucleosome. 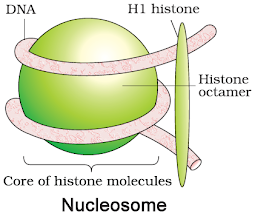