It is located in the pelvic region. 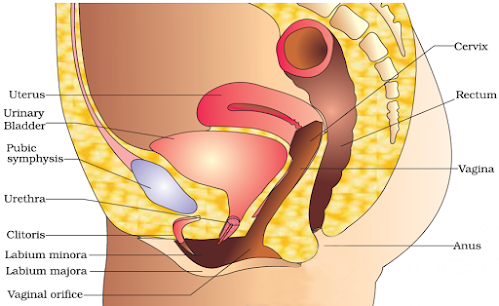 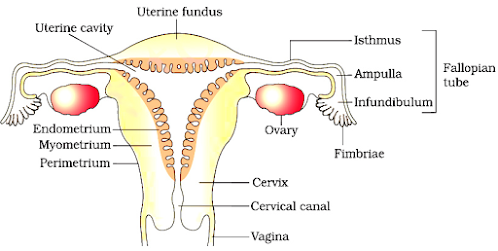 -    They are located on both side of the lower abdomen and connected to the pelvic wall and uterus by ligaments.

-    Each ovary is covered by a thin epithelium which encloses the ovarian stroma.

-    The stroma has outer cortex and inner medulla.

·   Infundibulum: Funnel-shaped opening provided with many finger-like fimbriae. It helps to collect the ovum.

The ciliated epithelium lined the lumen of the oviduct drives the ovum towards the uterus.

Ø Uterus (womb):  It is inverted pear shaped. It is supported by ligaments attached to the pelvic wall.

The uterine wall has 3 layers:

Ø Vagina: It opens to the exterior between urethra & anus.

-    Hymen (Maiden head): A membrane which partially cover the vaginal opening. It is often torn during the first coitus. It may also be broken by a sudden fall or jolt, insertion of a vaginal tampon; active participation in some sports items etc. In some women, hymen persists after coitus. So the hymen is not a reliable indicator of virginity or sexual experience.

-    Clitoris: A highly sensitive organ lying just in front of the urethral opening. 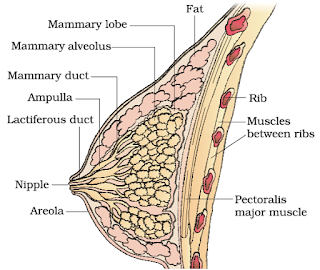 -    Cells of alveoli secrete milk. It is stored in lumen of alveoli.

-    The alveoli open into mammary tubules.

-    The tubules of each lobe join to form a mammary duct.

-    Several mammary ducts join to form a wider mammary ampulla which is connected to lactiferous duct through which milk is sucked out.