-    It is the formation of gametes in the gonads.

-    It is 2 types: Spermatogenesis and Oogenesis.

It is the process of formation of sperms (spermatozoa) in seminiferous tubules of testis. It has 2 stages:

a.    Formation of spermatids: In this, Sperm mother cells (Spermatogonia or male germ cells) produce spermatids.

b.    Spermiogenesis: Spermatids transform into sperm. 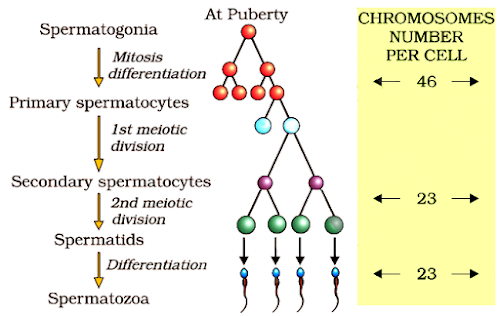 -    4 spermatids are formed from each primary spermatocyte.

-    After spermiogenesis, sperm heads are embedded in Sertoli cells to get nourishment. Then they are released to lumen of seminiferous tubules. It is called spermiation. 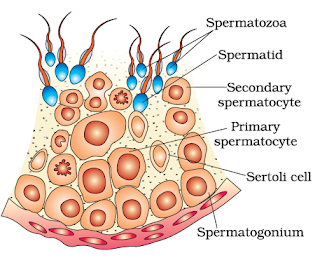 Role of Hormones in Spermatogenesis

-    LH acts on the Leydig cells and stimulates secretion of androgens. Androgens stimulate the spermatogenesis.

-    FSH acts on the Sertoli cells and stimulates secretion of some factors for the spermiogenesis. 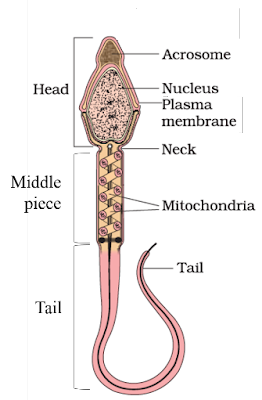 -    A plasma membrane envelops the whole body of sperm.

a.  Head: Oval shaped. Formed of nucleus and acrosome. Acrosome is formed from Golgi complex. It contains lytic enzymes. Behind the head is a neck.

c.  Tail: Consists of a central axial filament. The sperm moves in fluid medium and female genital tract by the undulating movement of the tail.

-   For normal fertility, at least 60% sperms must have normal shape and size. 40% of them must show vigorous motility.