-    After implantation, finger-like projections (chorionic villi) appear on the trophoblast.

-    They are surrounded by uterine tissue and maternal blood.

-    The chorionic villi & uterine tissue are interdigitated to form placenta. It is a structural and functional unit b/w embryo (foetus) and maternal body.

-    Placenta is connected to the embryo by an umbilical cord. It transports substances to and from the embryo. 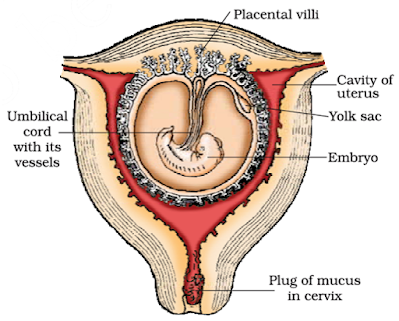 ·   Acts as barrier between the foetus and mother.

-    During pregnancy, levels of estrogens, progestogens, cortisol, prolactin, thyroxin etc. are also increased in maternal blood. They support the fetal growth, metabolic changes in the mother and maintain pregnancy.

Changes in embryo during pregnancy

·    End of second month: Limbs and digits are developed.

·    During 5th month: First movement of foetus and appearance of hair on the head.

·   End of 24 weeks (end of 2nd trimester): Body is covered with fine hair, eyelids separate and eye lashes are formed.

-    Parturition (labour): Process of giving birth to young ones.

-    Parturition is induced by neuroendocrine mechanism.

-  The signals originating from the foetus and placenta induce mild uterine contractions (fetal ejection reflex). This causes the release of oxytocin from maternal pituitary.

-    Oxytocin causes stronger uterine muscle contractions which in turn stimulate further secretion of oxytocin. This process is continued leading to expulsion of the baby out of the uterus through the birth canal.

-    After parturition, the umbilical cord is cut off.

-    The placenta & remnants of umbilical cord are expelled from the maternal body after parturition. It is called “after birth”.

-    The mammary glands produce milk towards the end of pregnancy. It is called lactation.

-    The yellowish milk produced during the initial few days of lactation is called colostrum. It contains several antibodies essential to develop resistance for the new born babies.