-    It is the process of formation and maturation of ovum.

-    It takes place in Ovarian follicles. 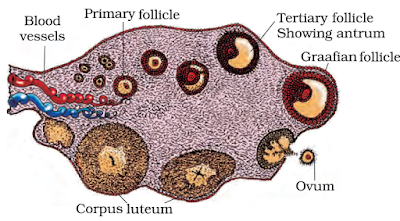 -    Oogenesis is initiated in embryonic stage when 2 million of egg mother cells (oogonia) are formed within each ovary.

-    No more oogonia are formed and added after birth.

-    Oogonia multiply to form primary oocytes. They enter prophase-I of the meiosis and get temporarily arrested at that stage.

-    Each primary oocyte gets surrounded by a layer of granulosa cells to form primary follicle.

-    Primary follicles get surrounded by more layers of granulosa cells and a new theca to form secondary follicles.

-    The secondary follicles transform into a tertiary follicle. It has a fluid filled cavity (antrum). The theca layer forms an inner theca interna and an outer theca externa.

-    It is unknown that whether the first polar body divides further or degenerates.

-    Graafian follicle now ruptures to release the secondary oocyte (ovum) from the ovary. This is called ovulation. 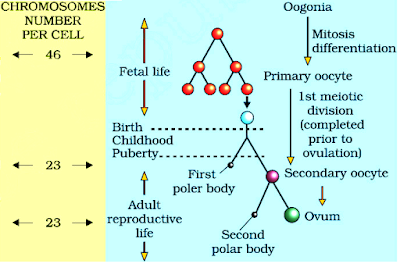 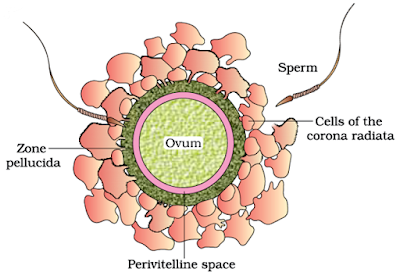 b.    Zona pellucida: Outer to the plasma membrane.