-    During copulation, semen is released by the penis into the vagina. It is called insemination.

-    Fusion of a sperm with ovum is called fertilization. It occurs in Ampullary region of fallopian tube.

-  Fertilization happens only if ovum & sperms are transported simultaneously. So all copulations do not lead to fertilization & pregnancy.

-    A sperm contacts with zona pellucida. It induces changes in the membrane that block entry of additional sperms.

-   The secretions of the acrosome help sperm to enter the egg cytoplasm via zona pellucida & plasma membrane. This causes second meiotic division of secondary oocyte to form an ovum (ootid) and a second polar body.

-    The haploid nuclei of the sperm and ovum fuse together to form a diploid zygote.

-    Zygote undergoes mitotic division (cleavage) as it moves through the isthmus towards the uterus and forms 2, 4, 8, 16 daughter cells called blastomeres.

-    Morula continues to divide and transforms into blastocyst.

-    In blastocyst, blastomeres are arranged into trophoblast (outer layer) and an inner cell mass attached to trophoblast.

-    The trophoblast layer gives nourishment to inner cell mass. Also, it gets attached to endometrium.

-    After attachment, uterine cells divide rapidly and cover the blastocyst. Thus, the blastocyst becomes embedded in the endometrium. This is called implantation. 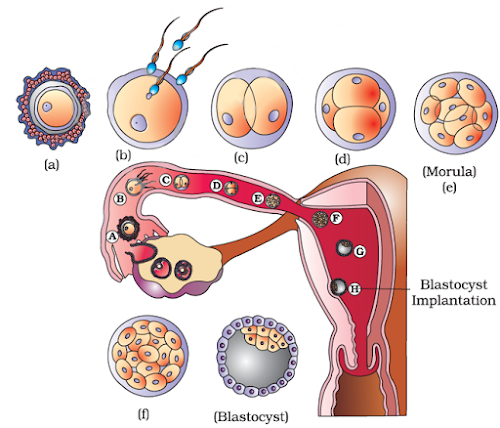