Take 10 mL of water each in two test tubes A & B.
Add a drop of cooking oil to both the test tubes.
To the test tube B, add few drops of soap solution.
Shake test tubes vigorously to get unclear mixtures.
Leave the test tubes undisturbed for some time. Oil layer separates out in both test tubes. But this happens first in test tube A.
This activity demonstrates the effect of soap in cleaning.
Most dirt is oily and does not dissolve in water.
Soap molecules are sodium / potassium salts of long-chain carboxylic acids.
Ionic-end (hydrophilic) of soap interacts with water while carbon chain (hydrophobic tail) interacts with oil. The soap molecules, thus form structures called micelles. In this, one end of the molecules is towards the oil droplet and the ionic-end faces outside. It forms an emulsion in water. The soap micelle thus helps in pulling out the dirt in water and clothes become clean. 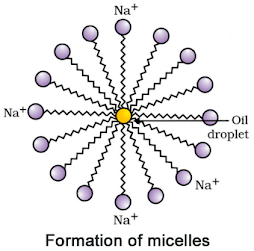 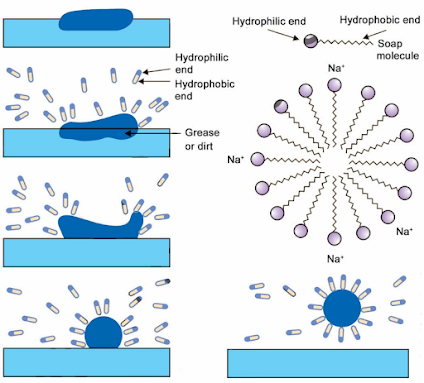 Effect of soap in cleaning

At the surface of water, soap aligns such that its ionic end is in water and hydrocarbon tail protrude out of water.

Inside water, these molecules form clusters in which the hydrophobic tails are oriented towards interior and the ionic ends towards exterior. This cluster is called a micelle.

The oily dirt is collected in the centre of micelle. The micelles stay as a colloid and will not come together to precipitate because of ion-ion repulsion. So, the dirt in micelles is easily rinsed away.


The water containing sulphates/ chlorides/ hydrogen carbonates of calcium or magnesium is called hard water. E.g. Water from tube well or hand-pump.
It is difficult to produce foam by soaps in hard water. So bathing and washing become difficult. After washing, an insoluble substance (scum) remains in hard water. It can be demonstrated by the following experiment:
This scum or precipitate is caused by the reaction of soap with the calcium and magnesium salts.

These are sodium salts of sulphonic acids or ammonium salts with chlorides or bromides ions, etc.
Both have long hydrocarbon chain. Charged ends of these compounds do not form insoluble precipitates with Ca & Mg ions. Thus, they are also effective in hard water.
It can be demonstrated by the following experiment:
Detergents are used to make shampoos and products to clean clothes.