Carbon has two unique properties called Catenation & Tetravalency. So it can form millions of compounds.

This outnumbers the compounds formed by all the other elements put together.

It is the ability of carbon to form bonds with other atoms of carbon, giving rise to large molecules.

They may be long chains, branched chains or ring forms.

No other element exhibits catenation like carbon. Silicon forms compounds with hydrogen which have chains of up to 7 or 8 atoms, but these are very reactive. Carbon-carbon bond is very strong & stable. This gives large number of compounds.

Carbon can bond with four other atoms of carbon or some other monovalent elements.

Carbon atom is small-sized. So the nucleus can hold the shared pairs of electrons strongly. So carbon can make very stable compounds with other elements. The bonds formed by elements having bigger atoms are weaker.

It was thought that organic or carbon compounds could only be formed with the help of a vital force (i.e., a living system is needed).

Friedrich Wöhler (1828) disproved this by preparing urea from ammonium cyanate.

But carbon compounds, except for carbides, oxides of carbon, carbonate and hydrogencarbonate salts are studied under organic chemistry.

Saturated compounds: They are linked by only single bonds between the carbon atoms. These are not very reactive. E.g. Ethane (C2H6).
Structure of ethane: 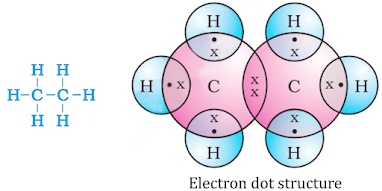 These structures have same formula C4H10. Such compounds with identical molecular formula but different structures are called structural isomers.
Some compounds have carbon atoms arranged in the form of a ring. E.g., cyclohexane (C6H12).

Will you be my Friend?


Carbon also bonds with other elements such as halogens, oxygen, nitrogen & sulphur.
In a hydrocarbon chain, one or more hydrogens are replaced by these elements.
The element replacing hydrogen is called a heteroatom.
Heteroatoms & the group containing these give specific properties to the compound, regardless of the length and nature of the chain. So they are called functional groups.

Some functional groups in carbon compounds 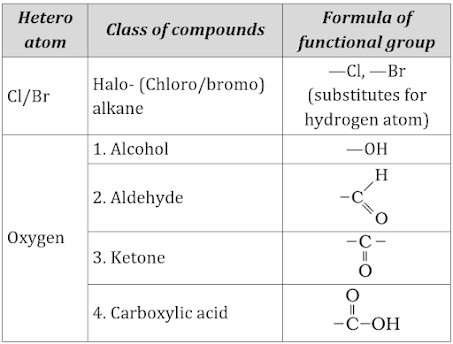 Free valency or valencies of the group are shown by the single line. The functional group is attached to the carbon chain through this valency.

General formula for alkanes is CnH2n+2.

General formula for alkynes is CnH2n-2.

Method of naming a carbon compound:

2.  Presence of functional group is indicated by a prefix or a suffix.

3.  If the suffix of the functional group begins with a vowel, the final letter ‘e’ is deleted from the name of the carbon chain. E.g., Propane with a ketone group is named as 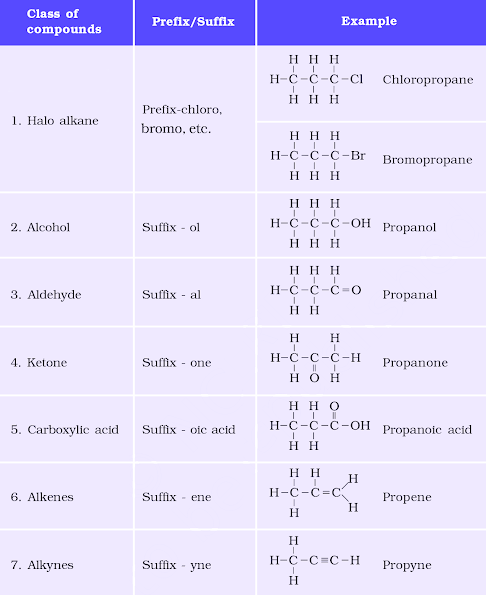