Most of the things are made up of compounds of carbon.

When a carbon compound is burnt, CO2 & water are produced. The presence of CO2 can be confirmed by passing it through lime water which turns milky.

Earth’s crust has only 0.02% carbon (as minerals like carbonates, hydrogen carbonates, petroleum, coal etc.). The atmosphere has 0.03% CO2. But carbon has immense importance.

BONDING IN CARBON – THE COVALENT BOND

Carbon compounds are poor conductors of electricity. So the bonding does not form ions. They have low melting & boiling points as compared to ionic compounds.

The simplest molecule formed by the sharing of valence electrons is that of hydrogen (Z= 1). It has one electron in K shell and needs one more electron to fill the K shell. So two hydrogen atoms share their electrons to form a hydrogen molecule (H2) and attain the nearest noble gas (helium- 2 electrons in K shell) configuration.

To represent valence electrons, dots or crosses are used.

The shared pair of electrons constitute a covalent bond between 2 hydrogen atoms. It is represented by a line. 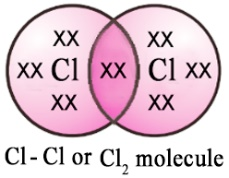 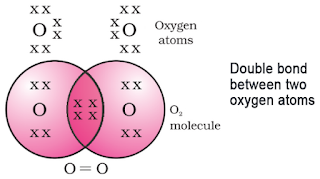 It requires two more electrons to complete its octet. 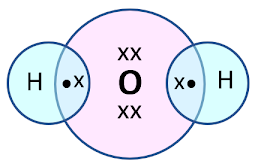 It forms a diatomic molecule (N2).

To attain an octet, each nitrogen atom in a nitrogen molecule contributes 3 electrons forming triple bond. 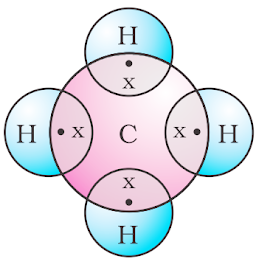 Methane is one of the simplest compounds of carbon.

It is used as a fuel and is a major component of biogas and Compressed Natural Gas (CNG).

Carbon shares these electrons with 4 hydrogen atoms to get a noble gas configuration.

The bonds formed by sharing of an electron pair between two atoms are called covalent bonds.

Covalently bonded molecules have strong bonds within the molecule, but intermolecular forces are weak. This gives rise to the low melting & boiling points.

Since the electrons are shared between atoms and no charged particles are formed, covalent compounds are generally poor conductors of electricity.

In diamond, each carbon atom is bonded to four other carbon atoms forming a rigid three-dimensional structure.

In graphite, each carbon atom is bonded to three other carbon atoms in the same plane giving a hexagonal array. One bond is double-bond to satisfy valency. Hexagonal arrays are placed in layers one above the other.

Diamond is the hardest substance. Graphite is smooth and slippery and a very good conductor of electricity.

Synthetic diamonds can be produced by subjecting pure carbon to very high pressure and temperature. These are small but indistinguishable from natural diamonds.
Fullerenes: The first identified one was C-60 which has carbon atoms arranged as a football. This looked like the geodesic dome designed by US architect Buckminster Fuller. So it was named fullerene. 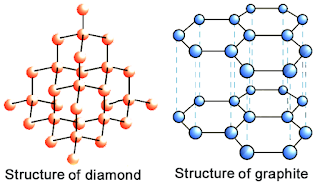 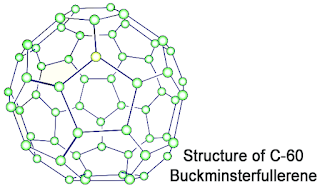