-   The earth’s crust is the major source of metals.

-   The elements or compounds which occur naturally in the earth’s crust are called minerals.

-   The minerals that contain a very high percentage of a particular metal are called ores. Metal can be profitably extracted from it.

-   Metals are found in the earth’s crust in the free state or as compounds.

-   Based on the reactivity, metals are 3 types:

a)    Metals of low reactivity: The metals at the bottom of the activity series. They are found in a free state. E.g. gold, silver, platinum and copper. Cu & Ag are also found in the combined state as sulphide or oxide ores.

b)   Metals of medium reactivity: Metals in the middle of the activity series (Zn, Fe, Pb, etc.). Found in earth’s crust mainly as oxides, sulphides or carbonates.

c)    Metals of high reactivity: Metals at the top of activity series (K, Na, Ca, Mg & Al). They are never found in nature in free state.

-   Ores of many metals are oxides. This is because oxygen is very reactive and is very abundant on the earth.

-   Different techniques are used to obtain metals in each category.

-   There are several steps in the extraction of pure metal from ores. They are given below: 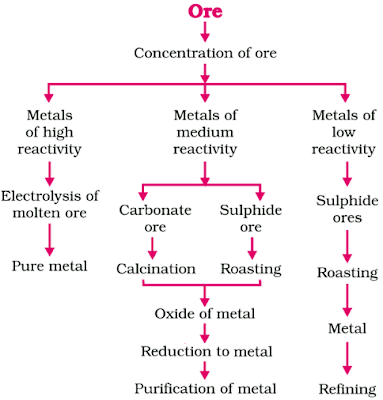 -   Ores are usually contaminated with large amounts of impurities such as soil, sand, etc., called gangue.

-   There are different separation techniques to remove the gangue based on the differences between physical or chemical properties of gangue and ore.

-   The oxides of these metals can be reduced to metals by heating. E.g., cinnabar (HgS) is an ore of mercury. When it is heated in air, it is first converted to mercuric oxide (HgO). Then it is reduced to mercury on further heating.

-   Cu2S (copper ore) on heating in air is reduced to copper.

Extracting Metals in the Middle of the Activity Series

-   These are present as sulphides or carbonates in nature.

-   It is easier to obtain a metal from its oxide, as compared to its sulphides & carbonates. So, the metal sulphides and carbonates are first converted into metal oxides.

-   The sulphide ores are converted into oxides by heating strongly in presence of excess air. This is called roasting.

-   The carbonate ores are changed into oxides by heating strongly in limited air. This is called calcination.

-   The metal oxides are then reduced to the metals by using suitable reducing agents such as carbon. E.g., when zinc oxide is heated with carbon, it is reduced to zinc.

-   Obtaining metals from their compounds is also a reduction process.

-   Besides using carbon (coke) to reduce metal oxides to metals, sometimes displacement reactions can also be used. The highly reactive metals such as sodium, calcium, aluminium, etc., are used as reducing agents because they can displace metals of lower reactivity from their compounds. E.g., when manganese dioxide is heated with aluminium powder, following reaction takes place

-   Here, MnO2 is reduced and Aluminium is oxidised.

-   These displacement reactions are highly exothermic. So the metals are produced in molten state.

-   The reaction of iron(III) oxide (Fe2O3) with aluminium is used to join railway tracks or cracked machine parts. This reaction is called the thermit reaction.

Extracting Metals towards the Top of the Activity Series

-   Highly reactive metals cannot be obtained from their compounds by heating with carbon. E.g., carbon cannot reduce the oxides of Na, Mg, Ca, Al, etc. This is because these metals have more affinity for oxygen than carbon.

-   These metals are obtained by electrolytic reduction.

-   Similarly, aluminium is obtained by the electrolytic reduction of aluminium oxide.

-   The metals produced by reduction are not very pure.

-   The most widely used method for refining impure metals is electrolytic refining.