HOW DO METALS AND NON-METALS REACT?

-   It means reactivity of elements is a tendency to attain a completely filled valence shell (noble gas configuration).

Electronic configurations of some elements:

-   A sodium atom has one electron in outermost shell (M).

-   If it loses the electron from M shell then its L shell becomes the outermost shell giving a stable octet. Now the number of electrons is 10 but the nucleus has 11 protons. So there is a net positive charge giving a sodium cation (Na+).

-   Chlorine has 7 electrons in outermost shell (M) and it needs one more electron to complete its octet.

-   When sodium reacts with chlorine, the electron lost by sodium is taken up by chlorine. Thus chlorine gets a stable octet and total 18 electrons in K, L and M shells. But its nucleus has only 17 protons. So, the chlorine atom gets a unit negative charge forming a chloride anion (Cl–). Thus, Na and Cl have a give-and-take relation.

-   The compounds formed by the transfer of electrons from a metal to a non-metal are called ionic compounds or electrovalent compounds.

-   Their physical state is hard and brittle. Soluble in water, but insoluble in petrol and kerosene.

-   Heat each sample directly on the flame using a spatula. They do not melt. Flame colour changes (NaCl = orange yellow, KI = violet and BaCl2 = green).

-   Make a circuit and insert the electrodes into a solution of each salt. Salt solution conducts electricity. 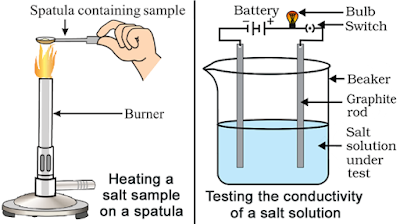 a.   Physical nature: Ionic compounds are solids and are hard due to strong force of attraction between positive & negative ions. They are generally brittle and break into pieces when pressure is applied.

b.  High Melting & Boiling points: This is because a considerable amount of energy is needed to break the strong inter-ionic attraction.

c.   Solubility: Generally soluble in water and insoluble in solvents such as kerosene, petrol, etc.