Elements can be classified as metals or non-metals on the basis of their physical and chemical properties.

The easiest way to start grouping substances is by comparing physical properties.

-   Clean their surfaces by rubbing with sand paper.

-   The surface becomes shining. This property is called metallic lustre.

-   Metals are generally hard and cannot be cut with a knife.

-   The hardness varies from metal to metal.

-   But sodium metal is soft and can be cut with a knife.

-   It is the ability of metals to be beaten into thin sheets.

-   Gold and silver are the most malleable metals.

-   It is the ability of metals to be drawn into thin wires.

-   Gold is the most ductile metal. One gram of gold can be drawn into a wire of about 2 km length.

-   Due to malleability & ductility, metals can be given different shapes according to our needs.

-   Clamp an aluminium or copper wire on a stand. 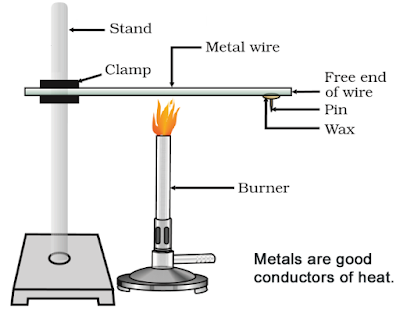 -   Heat the wire near the place where it is clamped. Heat transfers to the area of wax. It melts wax and the pin drops. But the metal wire does not melt.

-   It shows that metals are good conductors of heat and have high melting points.

-   Silver & copper are the best conductors of heat.

-   Set up an electric circuit as shown below.

-   Place a metal in the circuit between terminals A and B.

-   The bulb glows. It indicates that metals are good conductors of electricity.

-   The wires that carry current have a coating of PVC (polyvinylchloride) or a rubber-like material. They are insulators to prevent from electric shock.

-   It is the ability to produce sound on striking hard surface.

-   Metals are sonorous. So they are used to make bells.

-   There are very few non-metals as compared to metals.

-   Non-metals are solids or gases except bromine (a liquid).

-   Only very few non-metals have some physical properties of metals.

We cannot group elements according to their physical properties alone, as there are many exceptions. E.g.

·    Metals except mercury are solids at room temperature.

·    Carbon is a non-metal that can exist in different forms (allotropes). E.g. Diamond is the hardest natural substance and has very high melting and boiling point. Graphite is a conductor of electricity.

·    Alkali metals (lithium, sodium, potassium) are so soft and can be cut with a knife. They have low densities and low melting points.

Elements can be more clearly classified based on their chemical properties. E.g.

a) Burn magnesium ribbon. Collect the ashes and dissolve in water. Magnesium hydroxide is formed.

b) Burn sulphur powder. Collect the fumes (SO2) by placing a test tube over the burning sulphur.

Add some water to this test tube and shake. Sulphurous acid (H2SO3) is formed.

Most non-metals produce acidic oxides when dissolve in water. Most metals, give rise to basic oxides.