What happens when metals burn in air?

-   Reactivity of metals to oxygen in decreasing order is

-   Of the products (metal oxides), sodium oxide is soluble in water. Other metal oxides are insoluble.

-   Almost all metals combine with O2 to form metal oxides.

-   Metal oxides are basic in nature. But some metal oxides, such as aluminium oxide, zinc oxide show both acidic and basic behaviour. Such metal oxides which react with both acids & bases to produce salts and water are called amphoteric oxides. E.g. reaction of Aluminium oxide.

-   Most metal oxides are water insoluble but some (sodium oxide, potassium oxide etc.) are soluble to form alkalis.

-   Metals such as potassium & sodium react so vigorously that they catch fire if kept in the open. Hence, they are kept in kerosene oil.

-   At ordinary temperature, the surfaces of metals such as Mg, Al, Zn, Pb etc., are covered with a thin protective layer of oxide. It prevents metal from further oxidation.

-   Iron does not burn on heating but iron filings burn vigorously when sprinkled in the flame of the burner.

-   Copper does not burn, but the hot metal is coated with a black coloured layer of copper(II) oxide.

-   Silver & gold do not react with oxygen even at high temperature.

What happens when metals react with water?

-   Metals react with water and produce a metal oxide and hydrogen gas. Metal oxides that are soluble in water dissolve in it to form metal hydroxide. But all metals do not react with water.

-   Metals like potassium & sodium react violently with cold water. The reaction is exothermic so that the evolved hydrogen catches fire.

-   Reaction of calcium with water is less violent. The heat evolved is not sufficient for the hydrogen to catch fire.

-   Calcium starts floating because the bubbles of hydrogen gas formed stick to the metal surface.

-   Magnesium does not react with cold water. It reacts with hot water to form magnesium hydroxide and hydrogen. It also starts floating because bubbles of hydrogen gas stick to its surface.

-   Metals like aluminium, iron & zinc do not react with cold or hot water. But they react with steam.

-   Metals such as lead, copper, silver and gold do not react with water at all.

-   Reactivity of metals with water in decreasing order:

What happens when Metals react with Acids?

-   Metals react with acids to give a salt and hydrogen gas.

-   Suspend thermometers in the test tubes, so that their bulbs are dipped in the acid.

-   Copper does not react with dilute HCl. So bubbles are not formed and no change in temperature.

-   Hydrogen gas is not evolved when a metal reacts with nitric acid. It is because HNO3 is a strong oxidising agent. It oxidises the H2 to water and itself gets reduced to nitrogen oxides (N2O, NO or NO2). But magnesium and manganese react with very dilute HNO3 evolving H2.

Aqua regia, (Latin for ‘royal water’) is a mixture of conc. HCl & conc. HNO3 in 3:1 ratio. It is highly corrosive, fuming liquid. It is one of the few reagents that can dissolve gold and platinum.

How do Metals react with Solutions of other Metal Salts? 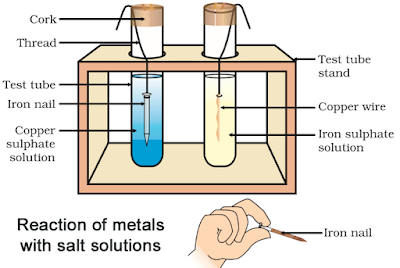 -   After 20 minutes, it is observed that blue CuSO4 solution turns green.

-   Iron is more reactive than copper. It displaces Cu from CuSO4 to form FeSO4. So CuSO4 solution turns green.

-   Displacement reactions are better evidence for the reactivity of metals. If metal A displaces metal B from its solution, it is more reactive than B.

-   All metals do not react with reagents like oxygen, water and acids. So we cannot put all the metal samples in decreasing order of their reactivity.

The Reactivity or Activity Series:

It is a list of metals arranged in the order of their decreasing activities. 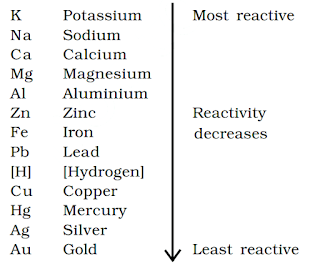