INHERITANCE OF TWO GENES
Dihybrid cross:
It is a cross between two parents differing in 2 pairs of contrasting characters. 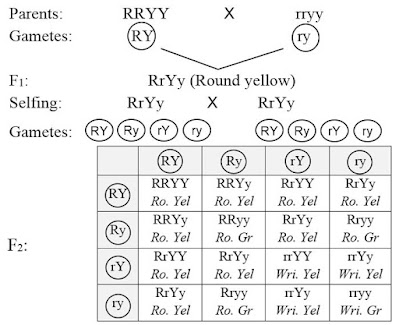 On observing the F2, Mendel found that yellow and green colour segregated in a 3:1 ratio.

Round & wrinkled seed shape also segregated in a 3:1 ratio.

Mendel’s 3rd Law: Law of Independent Assortment
It is based on the results of dihybrid crosses.

The concept of dominance
Every gene contains information to express a particular trait.

In 2nd and 3rd cases: The phenotype will dependent only on the functioning of the unmodified allele. Thus the modified allele becomes recessive.
============
👇 Select Your Topic Here 👇