Principles of Inheritance and Variation - Notes | Class 12 | Part 2: Inheritance of One Gene

INHERITANCE OF ONE GENE

Monohybrid cross: A cross involving 2 plants differing in one character pair. E.g. Mendel crossed tall and dwarf pea plants to study the inheritance of one gene. 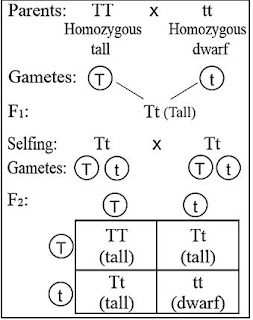 Mendel made similar observations for other pairs of traits. He proposed that some factors were inherited from parent to offspring. Now it is called as genes.

Do not use T for tall and d for dwarf because it is difficult to remember whether T & d are alleles of same gene or not.

Mendel self-pollinated the F2 plants.
He found that dwarf F2 plants continued to generate dwarf plants in F3 & F4.
He concluded that genotype of the dwarfs was homozygous- tt.

Back cross and Test cross
Backcross: Cross between a hybrid and its any parent.

Testcross: Crossing of an organism with dominant phenotype to a recessive individual. E.g.

Test cross is used to find out the unknown genotype of a character. E.g. 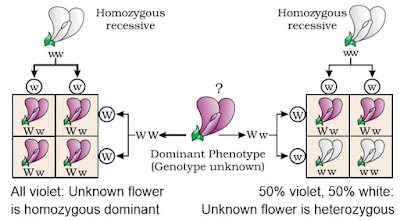 “During gamete formation, the factors (alleles) of a character pair present in parents segregate from each other such that a gamete receives only one of the 2 factors”.