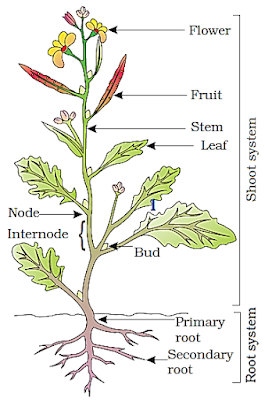 -  It is the ascending part of the axis that develops from the plumule of the embryo of a germinating seed.

-  Nodes are the regions of the stem where leaves are born. Internodes are the portions between two nodes.

☺  It conducts water, minerals and photosynthates.

o Stolon: Slender lateral branch that arises from the base of the main axis and after growing aerially for some time arch downwards to touch the ground. E.g. mint & jasmine.

o Offset: It is a lateral branch with short internodes and each node bearing a rosette of leaves and a tuft of roots. E.g. aquatic plants like Pistia and Eichhornia.

o Sucker: The lateral branches that originate from the basal underground part of the main stem. It grows horizontally beneath the soil and come out obliquely upward giving rise to leafy shoots. E.g. Banana, Pineapple & Chrysanthemum.