-    It is a ripened ovary developed after fertilisation.

-    It is a characteristic feature of the flowering plants.

-    A fruit formed without fertilisation of the ovary is called parthenocarpic fruit.

-    In mango & coconut, fruit is called a drupe. They are one seeded and develop from monocarpellary superior ovaries.

o  Pericarp (fruit wall): It may be dry or fleshy.

-    In coconut, the mesocarp is fibrous.

-    It is the mature ovule developed after fertilisation.

Structure of a Dicotyledonous Seed

-    The outermost covering of a seed is the seed coat.

-  On the seed coat, there is a scar called hilum through which the developing seeds are attached to the fruit.

-    Above the hilum is a small pore called the micropyle.

-    Within the seed coat is the embryo, consisting of an embryonal axis and two cotyledons.

-  The cotyledons are often fleshy and full of reserve food materials. At the two ends of the embryonal axis, the radicle and plumule are present.

-   In some seeds such as castor, the endosperm is formed due to double fertilisation. It is a food storing tissue.

-   In plants such as bean, gram and pea, the seeds are non-endospermous (endosperm is not seen in mature seeds). 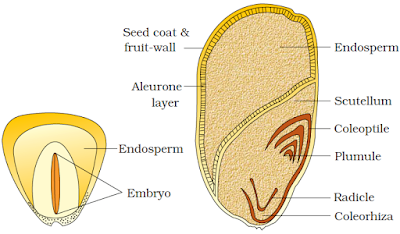 -    Generally, monocot seeds are endospermic but some are non-endospermic (e.g. orchids).

-   In cereals such as maize, the seed coat is membranous and generally fused with the fruit wall.

-   The endosperm is bulky and stores food.

-   The outer covering of endosperm separates the embryo by a protein layer called aleurone layer.

-  The embryo is small and situated in a groove at one end of the endosperm. It consists of one large and shield shaped cotyledon known as scutellum and a short axis with a plumule and a radicle.