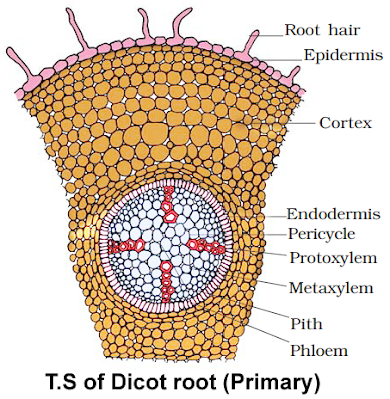 o Endodermis: Innermost layer of the cortex. It comprises a single layer of barrel-shaped cells without intercellular spaces.

The tangential and radial walls of the endodermal cells have a deposition of suberin (water impermeable, waxy material) in the form of casparian strips.

o Stele: All tissues on the inner side of the endodermis together constitute stele. They include

§ Pericycle: A few layers of thick-walled parenchyomatous cells next to endodermis. Initiation of lateral roots and vascular cambium during the secondary growth takes place in these cells.

§ Pith: Innermost region of the stele. It is small or inconspicuous.

§ Conjunctive tissue: The parenchymatous cells which lie between the xylem and the phloem. 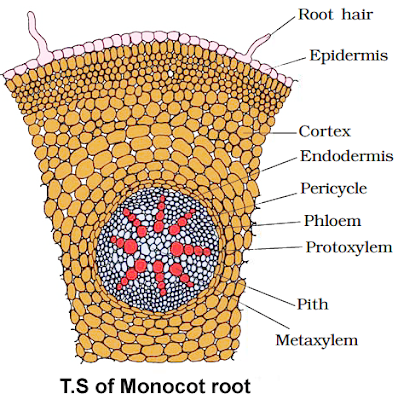 - It has epidermis, cortex, endodermis, pericycle, vascular bundles and pith.

- There are usually more than six (polyarch) xylem bundles.
- Pith is large and well developed.
- Monocot roots have no any secondary growth. 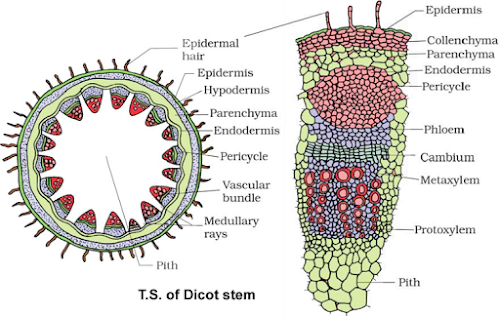 o Cortex: Multiple layers of the cells arranged in between epidermis and pericycle. It consists of 3 sub-zones:

§ Hypodermis: Outer zone. It consists of a few layers of collenchymatous cells just below the epidermis. It provides mechanical strength to the young stem.

§ Endodermis: Innermost layer. Cells are rich in starch grains. So it is also called starch sheath.

§ Pericycle: It is present on the inner side of the endodermis and above the phloem in the form of semi-lunar patches of sclerenchyma.

§ Medullary rays: These are few layers of radially placed parenchymatous cells in between vascular bundles.

§ Vascular bundles: Large in number. Their ring arrangement is a characteristic of dicot stem. Each vascular bundle is conjoint & open. Protoxylem is endarch.

§ Pith: Central portion of the stem. It has many rounded, parenchymatous cells with large intercellular spaces.

-    The phloem parenchyma is absent, and water-containing cavities are present within the vascular bundles. 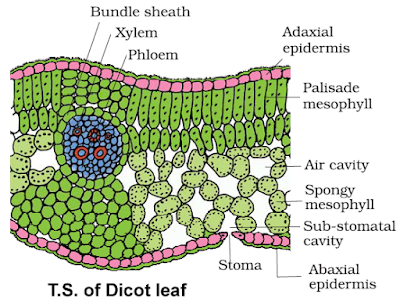 In adaxial epidermis, stomata are fewer or absent.

o Mesophyll: The tissue between the upper and the lower epidermis. It is made up of parenchyma. They contain chloroplasts for photosynthesis. It has 2 types of cells:

§ Palisade parenchyma: It is adaxially placed. Made up of elongated cells arranged vertically and parallel to each other.

§ Spongy parenchyma: The oval or round and loosely arranged. It is situated below the palisade cells and extends to the lower epidermis. There are numerous large spaces and air cavities between these cells.

o Vascular system: It includes vascular bundles. They can be seen in the veins and midrib.

Size of vascular bundles is dependent on the size of the veins. The veins vary in thickness in the reticulate venation of dicot leaves. Vascular bundles are surrounded by a layer of thick walled bundle sheath cells. 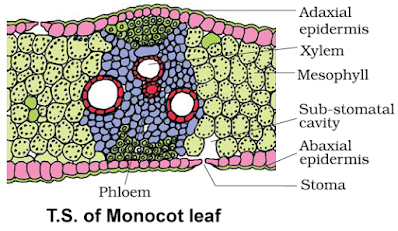 The anatomy of monocot leaf is like that of the dicot leaf in many ways. It shows following differences:

o Stomata are present on both surfaces of the epidermis.

o Mesophyll is not differentiated into palisade and spongy parenchyma.

o In grasses, certain adaxial epidermal cells along the veins modify into large, empty, colourless cells. These are called bulliform cells. When they have absorbed water and are turgid, the leaf surface is exposed. When they are flaccid due to water stress, they make the leaves curl inwards to minimise water loss.

o Parallel venation is reflected in the near similar sizes of vascular bundles (except in main veins).