-    The growth of the roots and stems in length with the help of apical meristem is called the primary growth.

-    Secondary growth is the increase in girth of dicot plants.

-    It is the meristematic layer responsible for cutting off vascular tissues (xylem and phloem).

-    In the young stem, it is present in patches as a single layer between xylem & phloem. Later it forms a complete ring.

Activity of the cambial ring

-  Cambium is more active on the inner side than on the outer. As a result, more secondary xylem is produced than secondary phloem and soon forms a compact mass. 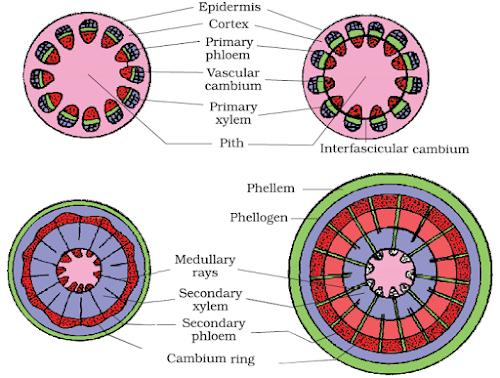 Secondary growth in a dicot stem – stages in transverse views

-    Many physiological & environmental factors control the activity of cambium.

-    In spring season, cambium is very active and produces many xylary elements having vessels with wider cavities. This wood is called spring wood (early wood). It is lighter in colour and has a lower density.

-    In winter, cambium is less active and forms fewer xylary elements having narrow vessels. This wood is called autumn wood (late wood). It is darker and has higher density.

-  These two kinds of woods that appear as alternate concentric rings constitute an annual ring. This is used to estimate the age of tree (Dendrochronology).

-  Heartwood: It is the hard, dead, dark brown-coloured, highly lignified and non-functional central part of the secondary xylem of old trees. The dark colour is due to deposition of organic compounds (tannins, resins, oils, gums, aromatic substances, essential oils etc). These substances make it hard, durable and resistant to the attacks of microorganisms and insects.

-  Sapwood: It is the peripheral region of secondary xylem. It is living and lighter in colour. It is involved in the conduction of water and minerals from root to leaf.

of vascular cambium, the outer cortical & epidermis layers get broken. It is to be replaced to provide new protective cell layers. Hence another meristematic tissue called cork cambium (phellogen) develops, usually in the cortex.

-    Phellogen is a couple of layers thick. It is made of narrow, thin-walled and nearly rectangular cells.

-    The cork is impervious to water due to suberin deposition in the cell wall.

-    Phellogen, phellem, and phelloderm are collectively known as periderm. Due to activity of cork cambium, pressure builds up on the remaining layers peripheral to phellogen and ultimately these layers die and slough off.

-  Bark is a non-technical term that refers to all tissues (periderm & secondary phloem) exterior to the vascular cambium. It is 2 types:

o Early (soft) bark: It is formed early in the season.

o Late (hard) bark: It is formed towards end of season. 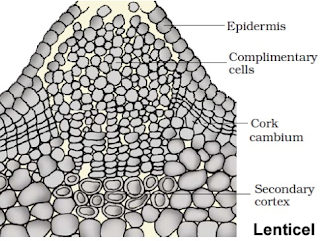 Function: Lenticels permit gas exchange of between the outer atmosphere and the internal tissue of the stem.

-    In dicot root, vascular cambium is completely secondary in origin. It originates from the tissue located just below the phloem bundles (a portion of pericycle) above the protoxylem forming a complete and continuous wavy ring. It later becomes circular.

-    Further events are similar to those of a dicotyledon stem.

-    Secondary growth also occurs in stems & roots of gymnosperms. But it does not occur in monocotyledons. 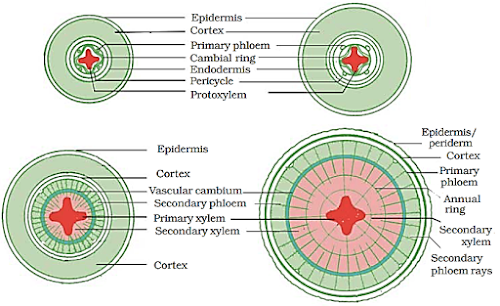 Different stages of the secondary growth in a typical dicot root