-    Anatomy is the study of internal structure of plants and other organisms.

-    A tissue is a group of cells having common origin and function.

-    Based on the capability of cell division, plant tissues are 2 groups: Meristematic and Permanent.

These are the tissues where active cell division and growth occurs. Based on the position, meristems are 3 types:

o Apical meristems: They occur at the tips of roots and shoots and produce primary tissues. It is 2 types:

§ Root apical meristem: It occupies the tip of a root.

§ Shoot apical meristem: It occupies the distant most region of the stem axis. Some cells left behind from shoot apical meristem, constitute the axillary bud. They are present in the axils of leaves and can form a branch or a flower.

o Intercalary meristems: They occur between mature tissues. They occur in grasses and regenerate parts removed by the grazing herbivores.

Apical and intercalary meristems are primary meristems because they appear early in a plant life and contribute to the formation of primary plant body. During that, specific regions of the apical meristem produce dermal tissues, ground tissues and vascular tissues.

o Secondary (lateral) meristems: The meristems that occur in mature regions of roots and shoots. They are cylindrical meristems. They are seen in gymnosperms and dicots.

-    The cells produced by primary and secondary meristems, become structurally and functionally specialized and lose the ability to divide. They are called permanent (mature) cells and constitute the permanent tissues.

-    The tissues having all cells similar in structure & function. 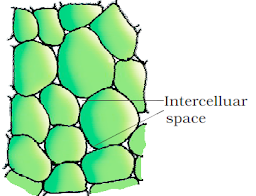 - It forms the major component within organs.
- Cells are generally isodiametric. They may be spherical, oval, round, polygonal or elongated.
- Their walls are thin and made up of cellulose.
- Cells are closely packed or have small intercellular spaces.
- Functions: Photosynthesis, storage, secretion etc.
b. Collenchyma 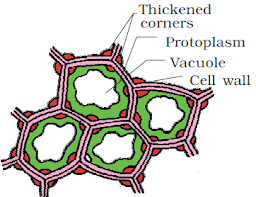 -    It occurs in layers below the epidermis in dicot plants.

-    It is found as a homogeneous layer or in patches.

-    It consists of cells with much thickened corners due to deposition of cellulose, hemicellulose and pectin.

-    Cells are oval, spherical or polygonal and often contain chloroplasts.

-    Functions: They provide mechanical support to the growing parts such as young stem and petiole of a leaf. The cells that contain chloroplasts assimilate food. 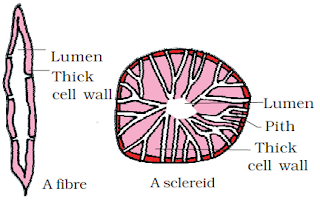 -    It consists of long, narrow cells with thick and lignified cell walls having a few or numerous pits.

-    They are usually dead without protoplasts.

-    Based on the form, structure, origin and development, sclerenchyma is 2 types: fibres & sclereids.

o Fibres: These are thick-walled, elongated and pointed cells, generally occurring in groups.

o Sclereids: These are spherical, oval or cylindrical, highly thickened dead cells with very narrow cavities (lumen). These are found in the fruit walls of nuts; pulp of fruits like guava, pear and sapota; seed coats of legumes and leaves of tea.

-    These are made of more than one type of cells and they work together as a unit. 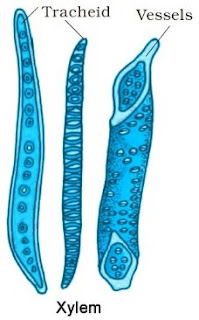 -    It functions as a conducting tissue for water and minerals from roots to the stem and leaves.

-    It also provides mechanical strength to the plant parts.

-    It is composed of 4 kinds of elements: tracheids, vessels, xylem fibres and xylem parenchyma.

o Tracheids: These are elongated tube like dead cells with thick and lignified walls and tapering ends. Protoplasm absent. The inner layers of cell walls have thickenings which vary in form. In flowering plants, tracheids & vessels are the main water transporting elements.

o Vessel: It is a long cylindrical tube-like structure made up of many cells (vessel members), each with lignified walls and a large central cavity. Protoplasm absent.

Vessel members are interconnected through perforations in their common walls. The vessels are a characteristic feature of angiosperms. Gymnosperms lack vessels.

o Xylem fibres: They have highly thickened walls and obliterated central lumens. They are septate or aseptate. 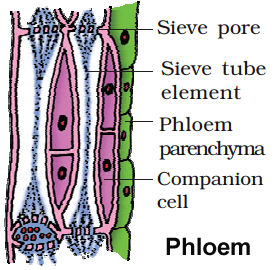 It transports food materials from leaves to other parts.

o Sieve tube elements: These are long, tube-like structures, arranged longitudinally and are associated with companion cells. Their end walls are perforated to form the sieve plates. A mature sieve element has a peripheral cytoplasm and a large vacuole but lacks a nucleus. The functions of sieve tubes are controlled by the nucleus of companion cells.

o Phloem parenchyma: It is made up of elongated, tapering cylindrical cells which have dense cytoplasm and nucleus. The cell wall is composed of cellulose and has pits through which plasmodesmatal connections exist between the cells. Phloem parenchyma is absent in most of the monocots.

Function: It stores food material and other substances like resins, latex and mucilage.

o Phloem fibres (bast fibres): These are made up of sclerenchymatous cells. Generally absent in primary phloem but are found in secondary phloem. These are much elongated, unbranched and have pointed, needle like apices. Cell wall is quite thick. At maturity, these fibres lose protoplasm and become dead. Phloem fibres of jute, flax and hemp are used commercially.