Evolutionary relationships of the species can be worked out by identifying hierarchies of their characteristics.

Characteristics are details of appearance or behaviour; i.e., a particular form or function. E.g. four limbs of animals, photosynthesis in plants etc.

Most organisms share some basic characteristics. Based on this, a hierarchy of classification is given below: 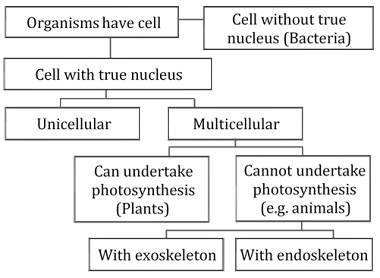 If two species have more common characteristics, they are more closely related and will have a recent common ancestor. E.g. A brother and a sister have immediate common ancestors (parents). But common ancestors of first cousins are grandparents. Thus classification of species reflects their evolutionary relationship.

Going backwards, we reach to a single species (single common ancestor) at the beginning of evolutionary time. 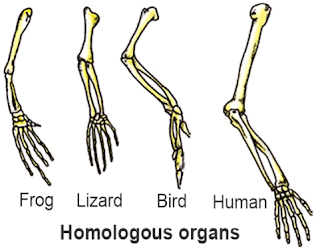 The organs having same function but different structure and origin are called analogous organs. E.g. wings of birds & bats.

Squirrels & lizards have no wings. It does not mean birds & bats more closely related.

Wings of bats are skin folds stretched between elongated fingers. But bird’s wings are a feathery covering along the arm. So the design, structure & components are different.

But the arms (forelimbs) of bird & bat can be considered as homologous because they have nearly same sets of bones. The forelimbs are modified into wings.

Fossils are preserved traces of organisms lived in the past. They help to understand about extinct species.  E.g.

o  A dead insect caught in hot mud will not decompose quickly, and the mud eventually harden and retain the impression of its body parts.

o  The dinosaur skull fossil in the Narmada valley.

Age of fossils can be estimated by two ways:

o  Relative: Fossils closer to the surface are more recent than the fossils in deeper layers.

o  Detecting the ratios of different isotopes of the same element in the fossil.

How do fossils form layer by layer?

Imagine some invertebrates on the sea-bed die 100 million years ago and are buried in the sand. As more sand accumulates, sandstone forms under pressure. Millions of years later, dinosaurs living in the area die, and are buried in mud. It also becomes rock above the rock containing the earlier invertebrate fossils.

Millions of years later, the bodies of horse-like creatures die and are fossilised in rocks above the earlier rocks.

Evolution of complex organs such as eye is the result of selection of number of intermediate stages. E.g. An intermediate stage such as a rudimentary eye (e.g. eye spots of Planaria), give a fitness advantage.

Also, a change useful for one property can become useful for quite a different function. E.g. Feathers start out as providing insulation in cold weather. But later, they might become useful for flight. Some dinosaurs (reptiles) had feathers, but they could not fly. Birds later adapted the feathers to flight. This means that birds are very closely related to reptiles.

All dissimilar structures are evolved from common ancestral design. This can be analysed by using fossils.

Such evolutionary relationship can be understood with the help of wild cabbage.

Humans started cultivation of wild cabbage more than 2000 years ago, and generated different vegetables from it by selection. This is artificial selection rather than natural selection.

All these structures are descended from same ancestor.

Changes in DNA during reproduction are the basic events in evolution. So comparing the DNA of different species gives a direct estimate of how much the DNA has changed during the speciation and find out where each change diverged from the other. This method is called Molecular phylogeny. It is extensively used to define evolutionary relationships.

EVOLUTION SHOULD NOT BE EQUATED WITH ‘PROGRESS’

There are multiple branches possible at each stage of tracing the family trees of species.

If a new species has emerged it does not necessarily mean that the old species disappear. It depends on the environment. Also, the newly generated species may not ‘better’ than the older one.

There is no real ‘progress’ in the idea of evolution.

The only progressive trend in evolution is that more and more complex body designs have emerged over time. However, many older and simpler designs still survive. E.g. bacteria inhabit the habitats like hot springs, deep-sea thermal vents and the ice in Antarctica. i.e., human beings are not the pinnacle of evolution, but simply another species in the evolutionary process.

All humans are a single species.

The earliest members of the human species, Homo sapiens, evolved in Africa.

A couple of hundred thousand years ago, some of human ancestors left Africa.

The migrants slowly spread from Africa to West Asia, then to Central Asia, Eurasia, South Asia, East Asia. They travelled down the islands of Indonesia and the Philippines to Australia, and they crossed the Bering land bridge to the Americas. This separation and mixing led to evolution of human to modern human.