Heredity (inheritance) is the transmission of characters from parents to offspring.

Evolution is the change in the characteristics of a species over several generations.

ACCUMULATION OF VARIATION DURING REPRODUCTION 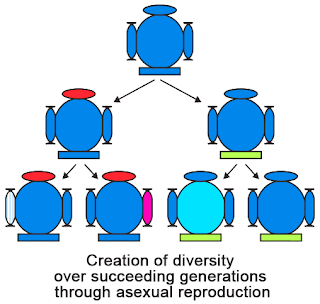 The variations in a species have no equal chances of surviving in the environment. Based on the nature of variations, different individuals would have different kinds of advantages. E.g. Bacteria that can withstand heat will survive better in a heat wave.

Selection of variants by environmental factors is the basis of evolution.

A child bears all the basic features of a human being. However, it does not look exactly like its parents.

Human populations show a great variation. E.g. Variation in ear lobes. Most of the individuals have free ear lobes (dominant trait) and some have attached ear lobe (recessive trait).

Rules for the Inheritance of Traits – Mendel’s Contributions

Father and mother contribute equal amounts of genetic material to the child. i.e., each trait is influenced by paternal and maternal DNA. Thus, for each trait there will be two versions in each child.

Gregor Johann Mendel (1822–1884) worked out the main rules of such inheritance.

Mendel allowed F1 tall plants to reproduce by self-pollination. The second-generation (F2) progeny was 75% tall and one quarter (25%) short. This indicates that both traits (tall and short) were inherited in the F1 plants, but only the tallness trait was expressed. Thus he proposed that two copies of factor (now called genes) control traits in sexually reproducing organism. They may be identical or different, based on the parentage. 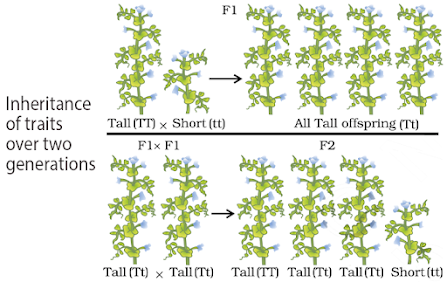 To confirm genotypic ratio, each F2 plants are crossed with a pure recessive (tt) variety. It is called Test cross.

TT & Tt are tall plants, while tt is a short plant. It means a single copy of ‘T’ can make the plant tall (dominant trait), but two copies of ‘t’ (tt) is needed to get short plant (recessive trait). 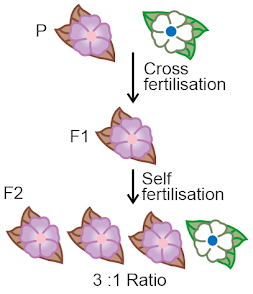 If the F1 progeny undergo self-pollination, the following types of F2 progeny are produced:

New combinations are formed due to independent inheritance of tall/short trait and round seed/wrinkled seed trait. 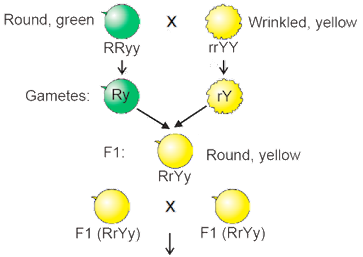 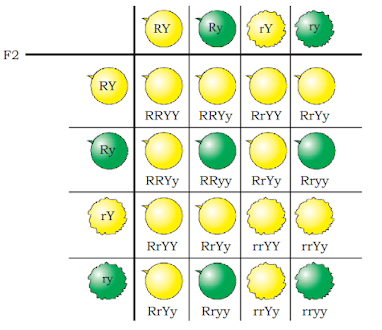 How do these Traits get Expressed?

DNA is the information source to make proteins in a cell.

A section of DNA that provides information for one protein is called the gene for that protein.

According to Mendelian experiments, both parents contribute DNA equally (copies of same genes) to the progeny. Thus each pea plant inherits 2 sets of all genes. For this, each germ cell must have only one gene set.

In Mendel’s experiment, the characteristics ‘R’ and ‘y’ independently inherited because they are not linked. This indicates that each gene set is not in a single DNA thread (i.e., not in a whole gene set), but in separate independent pieces, each called a chromosome. Thus, each cell has two copies of each chromosome, one each from male (paternal) & female (maternal) parents. Every germ cell takes one chromosome (maternal or paternal).

There are different strategies for sex determination.

Some species rely entirely on environmental cues. E.g. In a few reptiles, the temperature at which fertilised eggs are kept determines whether they become male or female.

In animals such as snails, individuals can change sex. It indicates that their sex is not genetically determined.

In human beings, the sex is genetically determined. The genes inherited from parents decide whether an individual be boy or girl. 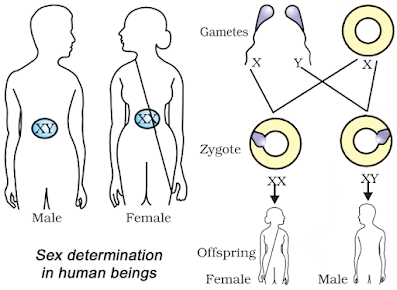 Half the children will be boys and half will be girls.

All children inherit an X chromosome from their mother.