Sexual reproduction and errors in DNA copying lead to variation. Its consequences are illustrated below: 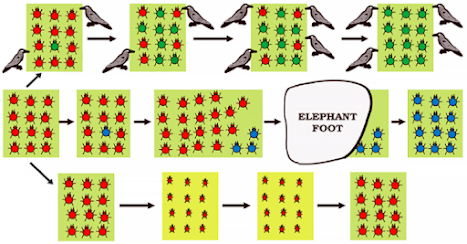 Variations in a population – inherited and otherwise

Consider a growing population of red beetles living in bushes with green leaves. Imagine that crows eat them.

Here, the following situations may be developed.

A heritable colour variation (green beetle) arises. Crows cannot see green beetles on the green leaves and cannot eat them. So, number of green beetles increases. But the red beetles are eaten and their number decreases.

Here, the variation became common because it gave a survival advantage (naturally selected). The natural selection is exerted by the crows. If there are more crows, more red-beetles would be eaten. So the proportion of green beetles increases. Thus, natural selection directs evolution. It results in adaptations in the beetle population to fit their environment better.

Crows can see and eat both blue and red coloured beetles in the green leaves.

Here, the colour change has no survival advantage. Blue coloured beetles accidentally survived and changed the common characteristic of the new population.

In a very large population, such events do not have major influence. But accidents in small populations can change the frequency of some genes. This is called genetic drift. It provides diversity without adaptations.

In the first & second situations, a rare variation became common characteristic in the population. It means frequencies of inherited traits and their genes change over generations. It is the essence of the idea of evolution.

The bushes are affected by a plant disease reducing the amount of leaf material. Poor nourishment reduces weight of beetles. Here, there is no genetic change.

After some generations, if the plant disease is eliminated and leaf food is increased, beetles’ weight again increases.

Reduced weight of beetles due to starvation will not change the DNA of the germ cells. i.e., it is not a heritable trait. So, it is not an example of evolution.

Change in non-reproductive tissues cannot be passed on to the DNA of the germ cells. So, the experiences of an individual (acquired traits) during its lifetime do not inherit and cannot direct evolution.

E.g. Breeding of mice produces all progeny with tails. If their tails are removed in each generation, they do not produce tailless progeny because it does not change the genes of germ cells.

So, the study of heredity and genetics are essential to understand evolution.

Charles Robert Darwin (1809–1882) set out on a five-year voyage to South America and proposed the idea of evolution of species by natural selection. But he could not explain mechanism of evolution.

Origin of life on earth

Stanley Miller & Harold Urey (1953) assembled an atmosphere similar to that of early earth (water vapour, NH3, CH4 and H2S, but no oxygen. Temperature just below 100°C). Sparks were passed through the gas mixture to simulate lightning. At the end of a week, 15% of the carbon converted to simple compounds including amino acids.