A. BRAIN
It is protected in cranial cavity.

The subarachnoid space (space between pia mater and arachnoid mater) is filled with cerebrospinal fluid (CSF). The ventricles of brain are also filled with CSF. 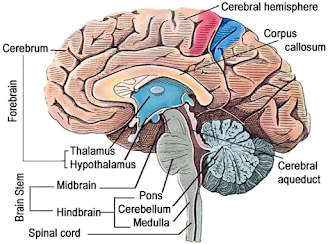 a. Forebrain (Prosencephalon)
It is the anterior part. Consists of cerebrum & diencephalon.

Cerebrum
Largest part.
It has 2 cerebral hemispheres held together by a tract of nerve fibres (Corpus callosum).

Outer part of cerebrum is called cerebral cortex. It has convulsions & depressions and is formed of gray matter. Gray colour is due to the presence of neuron cell bodies.

Inner part of cerebrum is formed of white matter.