These are the organs that detect the changes in the environment and convey the information to the CNS.


Two eyes are located in sockets of the skull called orbits. 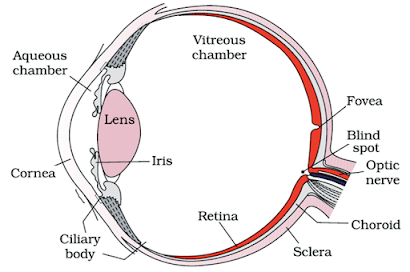 Photopigments are formed of opsin (a protein) and retinal (an aldehyde of vitamin A).

Cone cells:
Rod cells:
At the region, slightly above the posterior pole of the eyeball, optic nerves leave the eye and retinal blood vessels enter it. Here, photoreceptor cells are absent. It is called blind spot.

Lateral to the blind spot, there is a yellowish pigmented spot called macula lutea with a central pit (fovea).

The fovea is a thinned-out portion of the retina where only the cones are densely packed. It is the point of greatest visual acuity (resolution).

The space between the cornea and lens is called aqueous chamber. It contains aqueous humor (thin watery fluid).

The space between the lens and retina is called vitreous chamber. It contains vitreous humor (a transparent gel).

Mechanism of vision
Light reflected from an object → enters the eye through cornea & lens → focus on retina → dissociation of retinal from opsin → changes in membrane permeability → generates potential differences (impulse) in photoreceptor cells → generates action potentials in ganglion cells through bipolar cells → impulses are transmitted by optic nerves to brain (visual cortex) → impulses are analyzed and the image is recognized based on memory and experience → vision.
===========
👇 Select Your Topic Here 👇