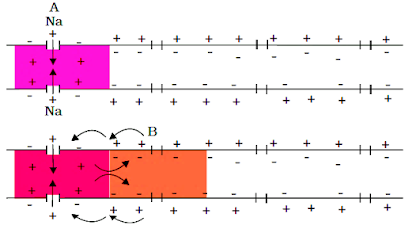 2. Action Potential
When a stimulus is applied, the membrane at the site A becomes permeable to Na+. This causes rapid influx of Na+ and reversal of the polarity at that site (outer negative and inner positive). It is called depolarization.

The electrical potential difference during depolarization across the plasma membrane is called action potential (a nerve impulse).

The sequence is repeated along the axon and the impulse is conducted.

Immediately, K+ diffuses outside the membrane and restores the resting membrane. Thus the fibre becomes ready for further stimulation.

Synaptic transmission of impulses
Synapse is a functional junction between two neurons.

It is 2 types: Electrical & Chemical.

1. Electrical synapses
In this, the membranes of pre- and post-synaptic neurons are in close proximity. So impulse transmission is similar to the transmission along an axon.

Impulse transmission is faster than in chemical synapse.

2. Chemical synapses
In this, there is a fluid filled space (synaptic cleft) between the presynaptic neuron and postsynaptic neuron. 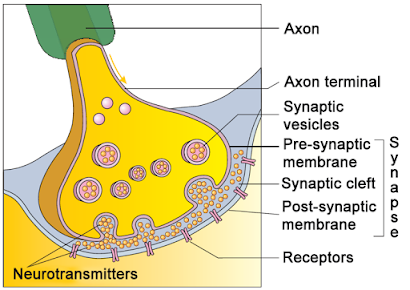 Impulse reaches at axon terminal → synaptic vesicles bind on plasma membrane → release of neurotransmitter → It diffuses across synaptic cleft → combine with receptors on the post synaptic membrane → opening of ion channels allowing entry of ions → generates action potential.
This action potential may be excitatory or inhibitory.
===========
👇 Select Your Topic Here 👇