20. LOCOMOTION AND MOVEMENT
Locomotion is the voluntary movements resulting in a change in location.
All locomotion are movements but all movements are not locomotion. Both are interlinked. E.g.
Types of movement in human being
Flagellar movement helps in the swimming of spermatozoa, maintenance of water current in the canal system of sponges and in locomotion of Protozoans like Euglena.


It includes muscles which are mesodermal in origin.

Muscles constitute 40-50% of the body weight.

Based on location, muscles are 3 types:


Skeletal muscle is made of muscle bundles (fascicles) held together by collagenous connective tissue layer (fascia). 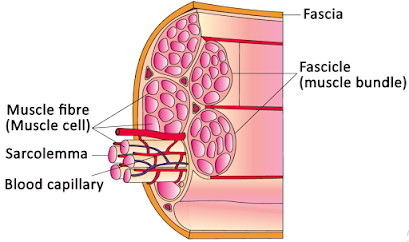 Each myofibril has alternate dark (Anisotropic or A-band) and light striations (Isotropic or I-band). This is due to the presence of 2 fibrous contractile proteins- thin Actin filament and thick Myosin filament.

A-band bears a lighter middle region (H band) formed of only myosin. A thin dark line (M-line) runs through the centre of H-zone.

I-band is bisected by a dense dark band called Z-line.
Region between two Z-lines is called sarcomere. They are the functional units of muscle contraction. 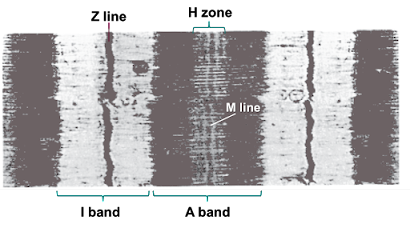 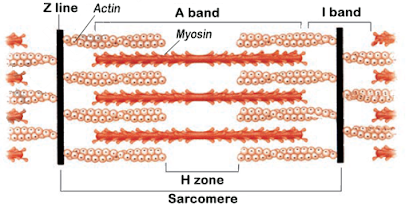 Structure of contractile proteins
An actin filament is made of 2 filamentous (F) actins which form double helix.

F-actin is a polymer of monomeric Globular (G) actins.

Two filaments of tropomyosin run along the grooves of the F-actin double helix.

Troponin has 3 subunits. It is seen at regular intervals on tropomyosin.
In the resting state, a subunit of troponin masks the binding sites for myosin on the actin filaments.

Each myosin filament is a polymer of many monomeric proteins called Meromyosins.

A meromyosin has 2 parts:
The globular head is an active ATPase enzyme and has binding sites for ATP and active sites for actin.
===========
👇 Select Your Topic Here 👇