-  It states that allele frequencies in a population are stable and is constant from generation to generation in the absence of disturbing factors.

-    The gene pool (total genes and their alleles in a population) remains a constant. This is called genetic equilibrium (Hardy-Weinberg equilibrium).

Change of frequency of alleles in a population disturbs Hardy-Weinberg equilibrium. This change is due to evolution.

a.  Gene migration: Gene flow from one population to another. Here gene frequencies change in both populations. Gene flow occurs if migration happens multiple times.

c.    Mutation: It results in formation of new phenotypes. Over few generations, this leads to speciation.

§ Directional selection: Individuals of one extreme (value other than mean character value) are more favoured.

§ Disruptive selection: Individuals of both extremes (peripheral character value at both ends of the distribution curve) are more favoured. 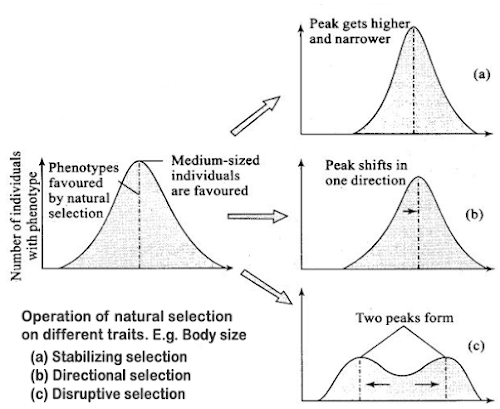