Paleontology is the study of fossils.
Fossils are remnants of life forms found in rocks (earth crust). They are written documents of evolution.
Significance of fossils:

2. Morphological & Anatomical evidences
Comparative anatomy and morphology shows that different forms of animals have some common structural features. This can be explained as follows:
a. Homologous organs

-    Homologous organs are the organs having fundamentally
similar structure and origin but different functions. This phenomenon is called Homology.
-    E.g. Human hand, Whale’s flippers, Bat’s wing & Cheetah’s foot. These forelimbs have different functions but similar anatomical structures such as bones (e.g. humerus, radius, ulna, carpals, metacarpals & phalanges).
-    Homology is also seen in heart, brain etc.
-    Homology in plants: E.g. Thorns of Bougainvillea and tendrils of Cucurbita.
-    The origin of homologous organs is due to Divergent evolution. It is the evolution by which related species become less similar to survive and adapt in different environmental condition.
-    Homology indicates common ancestry.

b. Analogous organs
These are the organs having similar function but different structure & origin. This phenomenon is called Analogy. E.g.
§ Wings of insects (formed of a thin flap of chitin) and wings of birds (modified forelimbs).
§ Eyes of Octopus (retina from skin) and mammals (retina from embryonic brain).
§ Flipper of Penguins and Dolphins.
§ Sweet potato (modified root) & Potato (modified stem).
§ Trachea of insects (from ectoderm) and lungs of vertebrates (from endoderm).
Origin of analogous organs is due to Convergent evolution. It is the evolution by which unrelated species become more similar to survive and adapt in similar environmental condition.
3. Adaptive radiation (Biogeographical evidences)
Adaptive radiation (evolution by adaptation) is the evolution of different species from an ancestor in a geographical area starting from a point. It is a type of divergent evolution. E.g.
o  Darwin’s finches in Galapagos Islands.
o  Australian marsupials (Marsupial radiation).
o  Placental mammals in Australia. 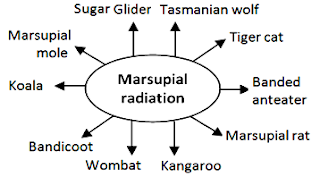 When more than one adaptive radiation is appeared in an isolated geographical area, it results in convergent evolution.
E.g. Australian Marsupials and Placental mammals.

-     Proposed by Ernst Haeckel.
-     He observed that all vertebrate embryos have some common features that are absent in adult.
-     E.g. all vertebrate embryos (including human) develop vestigial gill slits just behind the head.  But it is functional only in fish and not found in other adult vertebrates.
-     However, Karl Ernst von Baer rejected this proposal. He noted that embryos never pass through the adult stages of other animals.

6. Evidences for evolution by natural selection