Evolution is an orderly change from one form to another.

Evolutionary Biology is the study of evolutionary history of life forms.

- Big Bang Theory states that universe originated about 20 billion years ago by a singular huge explosion.

-  The earth was formed about 4.5 billion years ago.

-  There was no atmosphere on early earth. Water vapour, CH4, CO2 & NH3 released from molten mass covered the surface.

-  The ozone layer was formed. As it cooled, the water vapour fell as rain to form oceans.

THEORIES OF ORIGIN OF LIFE

1. Theory of spontaneous generation (Abiogenesis): It states that, life came out of decaying and rotting matter like straw, mud etc.

Louis Pasteur disproved this theory. He demonstrated that life comes only from pre-existing life.

He showed that life did not come from killed yeast in a closed pre-sterilized flask. But in an opened flask, life (microbes) appeared.

2. Biogenesis: Proposed by Francisco Redi, Spallanzani & Louis Pasteur. It states that, life originates from pre-existing life. But it does not explain origin of first life.

3.  Cosmic theory (Theory of Panspermia): It states that, the units of life (spores) were transferred to different planets including earth.

4.  Theory of special creation: It states that, living things were created by some supernatural power (God).

5.  Theory of chemical evolution: Proposed by Oparin & Haldane. It states that, the first form of life was originated from non-living inorganic & organic molecules such as CH4, NH3, H2O, sugars, proteins, nucleic acids etc. i.e. “Abiogenesis first, but biogenesis ever since”. 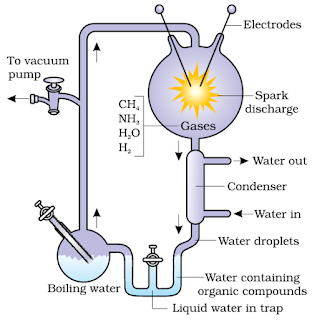 - They made electric discharge in a closed flask containing CH4, NH3, H2 and water vapour at 800o C. As a result, some amino acids are formed.

- In similar experiments, others observed formation of sugars, nitrogen bases, pigment and fats.