-    Life cycle of plants has 2 phases: Diploid sporophytic & haploid gametophytic. These phases alternate with each other. This is called alternation of generation.

-   Among different plant groups, length of the haploid & diploid phases is varied. Also, these phases are free living or dependent on others.

-    They directly or indirectly depend on plants for food.

-   They digest their food in an internal cavity and store food reserves as glycogen or fat. Their mode of nutrition is holozoic (by ingestion of food).

-    Most of them are capable of locomotion.

-    The sexual reproduction is by copulation of male and female followed by embryological development.

-    In the five-kingdom classification, acellular organisms (viruses, viroids & prions) and lichens are not mentioned.

-    Viruses are non-cellular and not truly ‘living’. So they are not included in five-kingdom classification.

-    Viruses have an inert crystalline structure outside the living cell.

-    When they infect a cell, they take over the machinery of the host cell to replicate themselves, killing the host.

-   D.J. Ivanowsky (1892) discovered virus. He recognized certain microbes that cause mosaic disease of tobacco. They were smaller than bacteria because they passed through bacteria-proof filters.

-   M.W. Beijerinek (1898) demonstrated that the extract of the infected tobacco plants cause infection in healthy plants and called the fluid as Contagium vivum fluidum (infectious living fluid).

-    W.M. Stanley (1935) showed that viruses could be crystallized and crystals consist largely of proteins.

-    The genetic material is infectious.

-  The capsid made of small subunits (capsomeres) protects nucleic acid. Capsomeres are arranged in helical or polyhedral geometric forms. 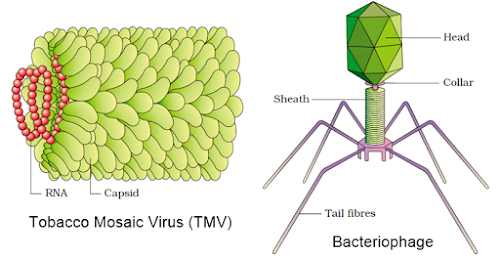 -    Viruses cause diseases like mumps, small pox, herpes, influenza & AIDS. In plants, the symptoms can be mosaic formation, leaf rolling and curling, yellowing and vein clearing, dwarfing and stunted growth.

-    Viroid: It is an infectious agent with a free low molecular weight RNA and no protein coat. These are smaller than viruses. It is discovered by T.O. Diener (1971). He found that it caused potato spindle tuber disease.

-    Prions: These are abnormally folded protein that cause some infectious neurological diseases. These are similar in size to viruses. They cause bovine spongiform encephalopathy (BSE) or mad cow disease in cattle and its analogous variant Cr-Jacob disease (CJD) in humans.

-    Algae prepare food for fungi and fungi provide shelter and absorb mineral nutrients and water for its partner.

-    Lichens are very good pollution indicators. They do not grow in polluted areas.