-    Bacteria are the most abundant microorganisms.

-    Hundreds of bacteria are present in a handful of soil.

-    They also live in extreme habitats such as hot springs, deserts, snow & deep oceans. Many are parasites.

-    Some bacteria are autotrophic (synthesize food from inorganic substrates). Majority are heterotrophs (they do not synthesize food but depend on other organisms or on dead organic matter for food).

-    Archaebacteria have a different cell wall structure for their survival in extreme conditions.

-   Methanogens are present in the guts of ruminant animals (cows, buffaloes etc). They produce methane (biogas) from the dung of these animals.

-    They have a rigid cell wall and a flagellum (if motile).

-    They include Autotrophs (photosynthetic and chemosynthetic) and Heterotrophs.

-    They have chlorophyll a similar to green plants.

-    The colonies are generally surrounded by gelatinous sheath.

-    Some of them fix atmospheric nitrogen in specialized cells (heterocysts). E.g., Nostoc & Anabaena. 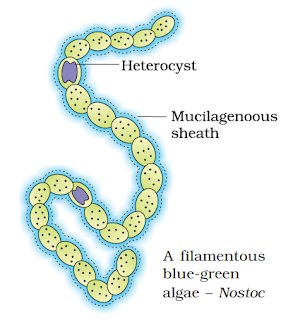 - They oxidize inorganic substances such as nitrates, nitrites & ammonia and use the released energy for ATP production.

-    They help in recycling nutrients like nitrogen, phosphorous, iron and sulphur.

-    They are the most abundant in nature.

-    The majority are important decomposers.

·   They are used to make curd from milk.

·   Under unfavourable conditions, they produce spores.

·   They also reproduce by a sort of sexual reproduction (DNA transfer from one bacterium to other). 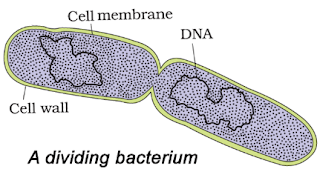 Mycoplasmas are organisms without a cell wall. They are the smallest living cells. They can survive without oxygen. Many are pathogenic in animals and plants.